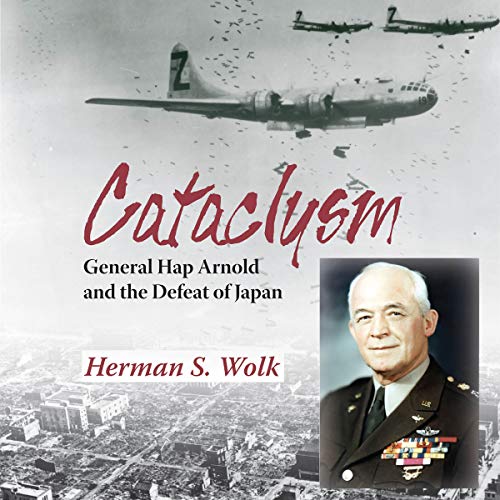 No previously published work examines General Henry H. “Hap” Arnold’s role in depth during the Pacific War of 1944-1945, in the context of planning for the destruction of Japan. In this new study, Herman S. Wolk, retired Senior Historian of the U.S. Air Force, examines the thinking of Hap Arnold, Commanding General, Army Air Forces (AAF), during World War II. Specifically, Wolk concentrates on Arnold’s leadership in crafting the weapons, organization, and command of the strategic bombing offensive against Japan, which culminated in Japan’s capitulation in the summer of 1945, ending the Pacific War.

The narrative is, in a real sense, a sustained controversy over strategy, organization, and command in the war against Japan. The B-29 long-range bombing campaign against the Japanese home islands dictated unprecedented organization and command; hence, Arnold established the Twentieth Air Force, commanded by himself from Washington and reporting directly to the Joint Chiefs of Staff. Here Arnold excelled in his command of the AAF, relieving a long-time colleague (Hansell) in favor of a hard-nosed operator (LeMay). This crucial move was a turning point in the Pacific war.

“Wolk's book includes more detail and depth on Pacific air campaign grand strategy than any other available. His work is a solid contribution....” (Dik A. Daso, author of Hap Arnold and the Evolution of American Airpower)

“Wolk has produced a volume with which students of the U.S. Air Force and World War II must reckon.” (Military History of the West)

“The author does an outstanding job of identifying the critical issues and events, helping us understand combat leadership.” (Journal of America's Military Past)

What listeners say about Cataclysm

An Examination of the Bombing of Japan

I have read many books about General Hap Arnold, the founder of the United States Air Force. In this book the author limited himself to the role of the Army Air Corp in the last part of World War Two in the Pacific.

The book is well written and researched. Wolk cover General Arnold’s battle to build a long-range bomber. The bomber that was built by Boeing was the B-29 Superfortress. Unlike in Europe the bombers had to travel long distances over water to attack Japan. Wolk also covered General LeMay’s bombing raids over Japan particularly discussing the incendiary bombs. Because Wolk limited his time frame, he was able to discuss in more detail the problems and solutions of the last part of the War. My biggest complaint about the book was its repetition. The book could have been maybe half the size without the constant repetition. It is important to judge this book within its time frame and not from an eighty year later rewrite. If you are a history buff, you will enjoy reading this book.

The book is eight hours and forty minutes. Roger A. Wyatt does a good job narrating the book. Wyatt is a voice-over artist and audiobook narrator.