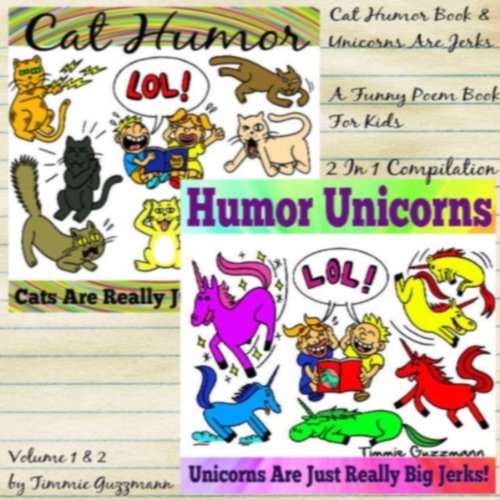 You and your kids will laugh out loud at funny sound effects of these Jerk Unicorn Jokes, Jerk Cat Jokes and these funny Cat Pee Jerk Jokes. That's twice the fun!

Cat and Unicorn lovers will laugh out loud at the jerkiness of their rainbow color striped and furry friends with these curious and humorous unicorn and cat poems and rhymes. In this hilarious Funny Poem Audiobook For Kids compilation of tongue-twisting and rhyming poetry, Timmie watches cats and unicorns while they think nobody watches them and unlocks the poet in him.

The poem collection in the audiobook perfectly captures the inner workings of the jerk unicorn and cat psyche.

The audiobook includes funny, hilarious and whimsical illustrations that reveal one horned horses and kitty cat's at their jerkiest moments.

Timmie opens the window of truth to shed light onto the most humorous and most daring jerk moments lived by these sparkly, rainbow colored, lazy, fickle, perky and pesky animals as they are going on about their day in a truly jerky way.

Timmie exposes true jerk personality and exposes some secrets that have never been told before.

Timmie takes a very refreshing approach (and you will laugh out loud!) and tells his rhyming story that is chock full of jerk personality, a jerkiness that really is out of this world (ootwjr AKA out of this world jerk reality!)

Let yourself be wowed and dive into a totally new genre of cat and unicorn jerkiness because you won't believe how these jerks are acting when they think nobody is watching them...