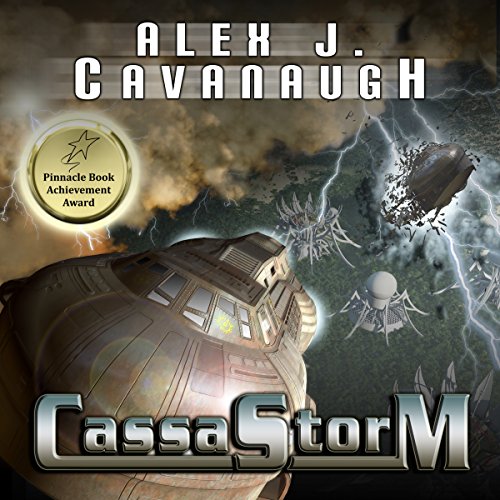 By: Alex J. Cavanaugh
Narrated by: Michael Burnette
Free with a 30-day trial

Commanding the Cassan base on Tgren, Byron thought he'd put the days of battle behind him. As a galaxy-wide war encroaches upon the desert planet, Byron's ideal life is threatened and he's caught between the Tgrens and the Cassans.

After enemy ships attack the desert planet, Byron discovers another battle within his own family. The declaration of war between all 10 races triggers nightmares in his son, threatening to destroy the boy's mind.

Meanwhile the ancient alien ship is transmitting a code that might signal the end of all life in the galaxy. And the mysterious probe that almost destroyed Tgren 20 years ago could return. As his world begins to crumble, Byron suspects a connection. The storm is about to break, and Byron is caught in the middle.

What listeners say about CassaStorm