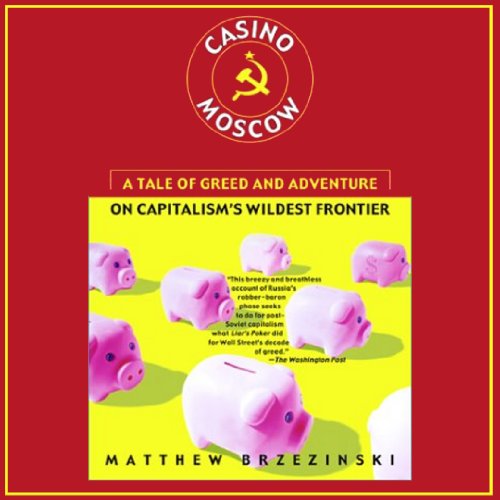 A Tale of Greed and Adventure on Capitalism's Wildest Frontier
By: Matthew Brzezinski
Narrated by: Kevin Stillwell
Length: 12 hrs and 59 mins
Categories: Nonfiction, Economics
4.5 out of 5 stars 4.3 (10 ratings)

Having awakened from its communist slumber, Russia in the roaring '90s is a place where everything and everyone is for sale and fortunes can be made and lost overnight. Into this maelstrom steps rookie Wall Street Journal reporter Matthew Brzezinski. Assigned to make sense of the financial markets, he is instantly plunged into the crazed world of Russian capitalism, where corrupt Moscow bankers and American carpetbaggers preside over the greatest boom and bust in international financial history.

Brzezinski knows he's in over his head; what he comes to realize is that "so is the entire country". The government of Boris Yeltsin is under the thumb of seven powerful men known as "the oligarchs", and a crime boss from Chechnya - even as his homeland is under siege by Russian troops - has set himself up as one of Moscow's most powerful warlords. Meanwhile, the gap between haves and have-nots is widening into an abyss. Among Moscow's elite, solid-gold bathroom fixtures are de rigueur, while in Vladivostok, the last stop on the Trans-Siberian railway, local citizens must buy water by the pail from Russian mafia chieftains.

Brzezinski's irreverent, swashbuckling account captures the greed and desperation of the time. He bribes his way aboard a Russian submarine. He survives a freak radiation spike at Chernobyl and travels 400 miles on a private plane for lunch with a gorgeous robber baroness. He's set upon by Ukrainian thugs, who leave him tied with electrical cord in a bathtub. Fortified with vodka, he crashes ultranationalist Vladimir Zhirinovsky's birthday party. And he visits a camp of "Young Pioneers", in which children play an elaborate game to learn the principles of a free market - with disastrous results that foretell the chaos in store for the Russian economy.

Just as Liar's Poker shone a torch on investment banking in the '80s, Casino Moscow paints a lurid, hilarious picture of a capitalist market gone haywire and an era marked by boundless hope and despair.

Yes. I enjoyed this book. it takes place primarily in 1996-97, and was written in 2001. Reading this after the most recent events in the Ukraine/Crimea, it is astounding how so many things can happen.
The opulence and the inflation and the fortunes won, lost, and held on to for dear life... quite compelling.
I know very little about banking, and these portions are definitely confusing and harder to follow, but overall, this book was a good read.

This book is an interesting look into a country that has been a bit of an enigma to me. The narrator was a good choice as well. I think I would have wished a bit more personal touches to this book, but that's a minor quibble in a suspenseful chronicle... I can't imagine a life where hefty bribes are the only way to get things done.

Excellent listen. Brzezinski is a pro.

Fantastic book about an amazing time in Russia. As far as corruption goes, little has changed in 20 years eh? Perhaps we was Westerners can learn from this and just leave people alone to do their own thing. Let Russia be Russia. Who gives a fuck if they are corrupt and steal from themselves? If we keep our greedy paws out of their business, we have nothing to fear from these people.