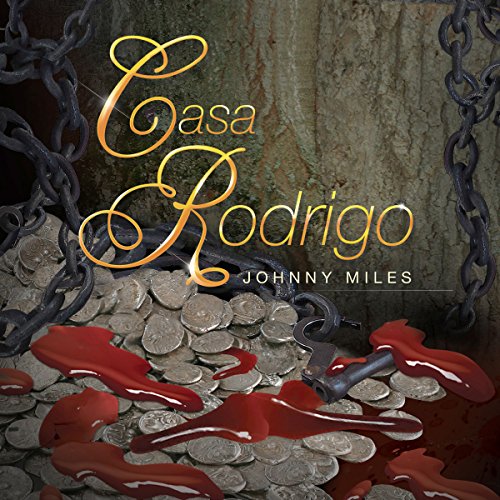 By: Johnny Miles
Narrated by: Kevin Bruce
Free with a 30-day trial

On a lush, tropical island inhabited by rogues, thieves, and villains, where men take the law into their own hands, a father and son are thrust into tumultuous events that will change their lives forever.

Bernardo de Rodrigo is proud of his son. Alonso is handsome and winning, and everyone he meets is instantly drawn to the tall, warm Spaniard. But how could either of them have known that a forbidden love is about to claim Alonso's heart?

Arbol, the charismatic male slave who was saved from the clutches of Raul Ignacio Velasco, feels an instant connection with Alonso the moment he looks into Arbol's eyes, the moment they touch.

Bernardo has other things to worry about, however. He's trying to exorcise himself of an intensely gratifying, yet shame-filled, sexual affair with Raul, who secretly adores Bernardo but doesn't know how to show it.

When Raul blackmails Bernardo, their dark and sordid relationship not only threatens the bond between father and son, it places Arbol's life in danger. Now Bernardo must make a difficult choice that could further alienate his son, while Alonso must find a way to keep the man he loves.

What listeners say about Casa Rodrigo

I enjoyed Casa Rodrigo years ago when I first read but loved it even more listening to it now, though that was because of the stellar narration, which I’ll get to later.

First of all, this isn’t a particularly easy story to read or listen to. It’s a historical tale set in the 1600’s and deals with slavery. It’s not easy reading about men who keep slaves, even if they are better than others depicted in the story.

There are a couple different stories going on here, the first of which deals with Alonso de Rodrigo and a slave named Arbol. Alonso and Arbol are drawn to each other the first time they’re reunited as adults, but their stations in life, among other things, keep them apart.

The chemistry between Alonso and Arbol is smoking right from the start and the sex scenes were unbelievable.

Another plotline in here is the one between Alonso’s father Bernardo and Raul Ignacio Velasco. Raul is a disgusting, vile human, but the author manages to show us even he has a heart. Alonso and Bernardo are having an affair and it’s filled with rough sex and nasty words. Not what most people would call a love connection, but deep down Raul loves Bernardo, he just doesn’t know how to show it. Kudos to Miles for not flinching away from showing the hard truth about not just slavery but also how gay men must have felt during that time period.

I listen to a lot of audio books but the narration for Casa Rodrigo is without a doubt the most unique and interesting narration I’ve ever heard.

To begin with Kevin Bruce does more than just read the book and provide varying voices for the different characters. This is more a performance than a simple narration. There is narration overlaid other noises, such as people walking or closing doors and clothes shuffling. There is even sounds of sex added for the lovemaking scenes between Alonso and Arbol.

On top of that Bruce nailed the accents of the characters and all the voices, even the female ones.

I’d give the narration more than five stars if I could.

In 16th Century Spain, a naked African slave woman flees through the night clutching her infant son as a cruel nobleman, intent on their destruction, gains ground. The baby is soon rescued by a kindly senora and her less-than-admirable husband, who, it turns out, is very good buddies with the murderous pursuer, Raoul. After debating on what to do with the baby, and worried about jeopardizing the future of their own twin sons, Don Bernardo and Mrs.di Rodrigo agree to ship him off to their sugar plantation in Puerto Rico in order to save his life.

Cut to many years later when a grown-up Alonzo (one of the twins) accompanies his father back to Puerto Rico to learn how to run the family business. He also learns a few other things when he discovers that (a) the evil Raoul owns a neighboring plantation on the island, and (b) Arvil, the young slave he remembers from his childhood, has grown into a rather splendid specimen of young manhood, causing no small amount of stirring in Alonzo's loins. This leads to a very difficult situation with only Don Bernardo initially realizing the extent to which the young loveres are endangering themselves. But Don Bernardo has his own secrets, and it's a toss-up to see whether or not he can disengage himself from his own addictions and do the right thing before the carnage begins

"Casa Rodrigo", by Johnny Miles, is a fine, fun, thrilling bodice ripper/erotic romance that keeps you engrossed from the opening chapter until the very end. It's explicit and highly entertaining, and you really find yourself cheering and booing various charcters throughout the book. I'd recommend this to anyone interested in a highly charged, exciting escape from mundane reality.

What was one of the most memorable moments of Casa Rodrigo?

Since this is an audiobook, I obviously couldn't actually turn the pages but the finale of the book is exactly that: a page turner that keeps you on edge as the author ratchets up the tension and the action turns dark.

Which character – as performed by Kevin Bruce – was your favorite?

I'm not sure which characters were performed by Kevin Bruce but I thought he was a fine narrator, very polished and professional, moving the book along at a brisk pace while bringing the action alive with his engrossing reading of Johnny Miles' expertly crafted tale.

The story certainly brings out strong emotions, particularly in reaction to Raoul, the chief villain of the tale. I also found myself drawn to the story of the young lovers, which is tender and sweet, and to the S&M-tinged secondary "romance", which is actually the catalyst for much of the book's action.

I really liked the use of sound effects--waves crashing, boards creaking, clothes dropping--and the actors all delivered excellent voice portrayals of the various characters populating "Casa Rodrigo". I was especially impressed with the actor voicing Raoul, who really brought a high degree of gusto and authenticity to his role as a sadistic, amoral monster.

Additionally, both the suspenseful plotting and writing, courtesy of author Johnny Miles, are excellent, and kept me, figuratively speaking, glued to the page.