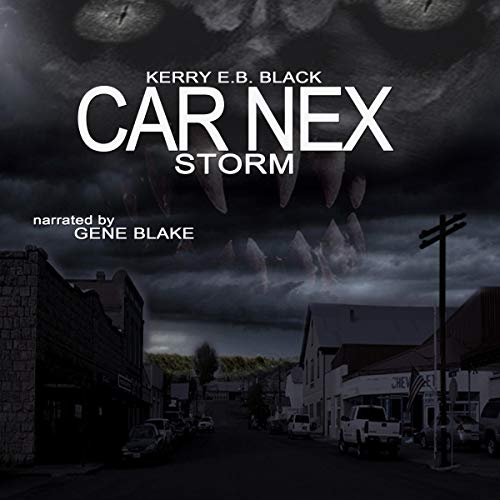 Mariah Dawn is a reporter for the Haunting Texas Landmarks website. She travels to Pleasant Storm, Texas, to visit the scene of the 1965 Campbell Massacre. While photographing the decaying remains of the farm for a piece on the anniversary of the murder spree, she finds an ancient book hidden on the premises. Mariah enlists the aid of Theresa Noble, her best friend and a linguistic anthropologist, to translate the book. But as the words are revealed, the evil responsible for the Campbell tragedy is once again unleashed. A storm is brewing. And it won't be pleasant.

The Car Nex story series presents tales from a variety of horror authors based on Terry M. West's wicked demon the Car Nex.

Would you consider the audio edition of Car Nex: Storm to be better than the print version?

Kerry is a magnificent storyteller and I always look forward to reading her stories because she's a brilliant writer. And everything I've ever read has always left me craving more of her works and I doubt there will ever be a day where I don't like something written by her. She's that amazing of a storyteller.

This story was creepy, let alone while you're listening to it home alone in the dark while a storm is brewing outside. So the atmosphere around me just amped up this stories spook appeal.

Oddly enough my favorite scene was when cat guts flew and landed on the car, I don't know what that was my favorite scene but for some reason the way the man read the scene just made it feel real. Plus, it's kind of gross to think you're sitting in your car and cat guts come flying at you.

Kerry writes brilliantly scary tells and I love each and everyone. And just having the story read aloud to me by a voice that sounds equally creepy, yet calming just puts you in a place where you allow yourself to relax but then get freaked out when things turn from calm to in your face. And I think that is the element that Kerry tries to capture in all of her works, and that is definitely what I got from this story. Also never go snooping around in a spooky house where people have died, it's just asking for trouble.

Mariah Dawn has to be my favorite character because I see a lot of myself in here. I'm naturally the person to go digging around in places that I don't belong. So, I would have went into that house searching for answers and I would have ended up in the same situations that Mariah found herself in. I like solving mysteries, even if it puts myself in danger and I feel that is Mariah down to the letter.

What does Gene Blake bring to the story that you wouldn’t experience if you just read the book?

Gene's voice is just a mixture of creep and calm. One minute it's soothing and peaceful the next it's creep and leaves you wondering what happened. It's like he lulls you into a false sense of security that the book isn't going to be scary and then he traps you like a venus fly trap trapping its prey.

If you could take any character from Car Nex: Storm out to dinner, who would it be and why?

Probably, Mariah because I'd pick her brain. I like to pick people's brain and understand the motives behind why they do certain things. So, for me I'd like to know why she went into the house, what compelled her to stay, and why she did things the way she did and if she would have done things different had she'd known the outcome of her decisions. I like digging for answers.

Would you consider the audio edition of Car Nex: Storm to be better than the print version?

I am a hands-on type of person and find it easiest to concentrate on written word. The audio version gave me chills as I heard the words, but seeing the words themselves allow me to become much closer to the characters.

The descriptions and strength of the characters and scenes.

When she found the attic desk and the scribbled notes and then found the book in a hidden spot in the drawer.

It gave me chills down my spine.

Gene Blake did well with the narration and Kerry E.B.Black wrote an excellent story. Well done. I enjoyed this thoroughly.

This was another fine addition to the Car Nex series, I enjoyed it from beginning to end. As other reviewers have noted it would be nice if Netflix,Amazon Prime Video, HBO, Showtime, or any one of the premium channels to be able to get the rights to Car Nex and make it a series to watch, I think it would do great.

The narration by Gene Blake was good....I received this audiobook code at my request and this is my voluntary review.

This is a great series and an awesome concept!

All the stuff that Netflix is doing they need to pick up the rights to the Car Nex series. This is a set of stories written by different authors all based on the concept of raising a demon, the Car Nex, and the chaos and death that follows. They are just great and would Make perfect episodes for a new horror series. Like the evil dead? This is a must for fans of short horror. I was voluntarily provided this free review copy audiobook by the author, narrator or publisher