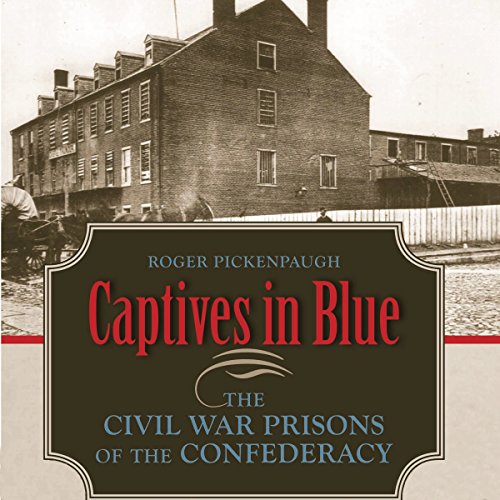 In June of 1861, only a few weeks after the first shots at Fort Sumter ignited the Civil War, Union prisoners of war began to arrive in Southern prisons. One hundred and fifty years later, Civil War prisons and the way prisoners of war were treated remain contentious topics. Partisans of each side continue to vilify the other for POW maltreatment.

In Captives in Blue, Pickenpaugh tackles issues such as the ways the Confederate Army contended with the growing prison population, the variations in the policies and practices in the different Confederate prison camps, the effects these policies and practices had on Union prisoners, and the logistics of prisoner exchanges. Digging further into prison policy and practices, Pickenpaugh explores conditions that arose from conscious government policy decisions and conditions that were the product of local officials or unique local situations. One issue unique to Captives in Blue is the way Confederate prisons and policies dealt with African American Union soldiers. Black soldiers held captive in Confederate prisons faced uncertain fates; many former slaves were returned to their former owners, while others were tortured in the camps.

" Captives in Blue is an excellent book that more thoroughly details life in Confederate-run prisons than anything currently available. I think it will stand as the starting place for all future studies of Southern prisoner of war facilities for a long time." (James M. Gillispie, author of Andersonvilles of the North)

What listeners say about Captives in Blue

This book gives us a bird eye view what happened during the civil war. I have to pause several times to absorb the knowledge I've gotten from this book

Neither side was prepared for the volume of POWs

Very well documented thesis addressing the problems of both Union POWs and Confederate management of prisons. Not just by mismanagement or deliberate cruelty were prisoners afflicted, but by unpreparedness for the housing, feeding, sanitation, and medical care. And the costs were totally unplanned. The bureaucratic mess surrounding prisoner exchanges is boggling. More than a history lesson, it becomes a humanity lesson.
Good thing Narrator Jack is on task to keep us from expiring from the tediousness of this excruciatingly precise and dismal recounting.

This is a well written book about how troops were treated in the prisons during the civil war.Jack Chekijian is the perfect narrator for something like this.Very interesting read.I was provided this book free by the author, narrator or publisher.

Civil War history buffs will likely enjoy this collection of information all in one place. The author has attempted to ferret out the truth to captured soldier prison conditions, and has brought together information from a variety of sources in a cohesive manual. The narrator easily navigates tough words and has the perfect voice for this type of book.

A Part of American History We Should Never Forget

"Captives in Blue" was truly an eye-opening listen. Oftentimes when we think of POW's we don't always consider the captives from the Civil War. The treatment of these men was horrific. It's beyond me what sense it makes.

I had a great uncle who was a POW during WWII and I've heard similar stories to these. It's sad and heart-breaking.

The inhumane conditions of the treatment and the food, and lack thereof, among everything else is something that should've never happened. The camps at Sumter, Belle Island, Jacksonville, and Florence, among others were filthy and it's hard to believe that this actually happened. People should never forget the history of this. Listening to the prison diaries was sadly engrossing.

I listened to this book in parts each day leading up to Memorial Day. It was an extremely comprehensive look at a grim time in American history. A great job by Roger Pickenpaugh.

Jack Chekijian's narration was perfect for this book. His approach was that of sincerity which came across very well. His pronunciation was impeccable and he speaks clearly with a nice tone. I enjoyed his work with this audio.