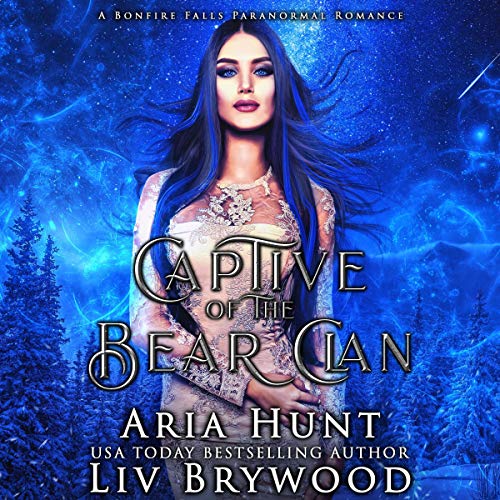 Captive of the Bear Clan: A Bonfire Falls Paranormal Romance

By: Liv Brywood,Aria Hunt
Narrated by: Meghan Kelly
Try for $0.00

On her 21st birthday, Minerva’s magic spirals out of control. Unable to hide the extent of her power, dangerous enemies attempt to steal her soul. She tries to fight them, but she can’t do it alone. Three bear shifters vow to defend her, but in exchange for their protection, they want something she’s not ready to give - her love.

Kaval, Draven, and Stone will do whatever it takes to claim the only woman they could ever love. Fighting is in their blood, but they’ve never battled dark magic. It’s unlike anything they’ve ever faced, but they’re determined to protect Minerva, even if it means making the ultimate sacrifice.

Captive of the Bear Clan is a complete book with a HEA, no cliffhangers, and no cheating. It’s the first book in the Bonfire Falls Paranormal Romance series.

What listeners say about Captive of the Bear Clan: A Bonfire Falls Paranormal Romance

This is a wildly entertaining story that captured my attention and my heart the entire time. I was not disappointed by the beautifully original and unique storyline that was highly complimented by outstanding characters that made me melt and cheer for them. This was an amazing addiction that had me on the edge of my seat the entire time! What a fascinating start to what I am sure will be a highly entertaining and wickedly fun series. Don't miss out on this incredible journey of discovery, love, and hope.

Meghan Kelly has eviscerated my heart with her seller narration of this brilliant story! Her mastery of multiple characters never cease to entertain and delight, and this was no exception. I savor every story that she brings to life for me, and I can feel her own creative footprint that she leaves on my heart along with the wonderful stories she weaves with her hypnotic power of voice. What an incredible experience that you do not want to miss!

not good at all

this was just bad. I really do try to find the good in books but I just couldn't with this one. I really want to give it no stars

Captive of the Bear Clan by Liv Brywood
This story starts with Minnie 21st birthday even though she’s not the popular in coven and actually can’t wield her magic the coven will have any excuse to throw a party.
While there she meets Kaval her bff bear shifter that isn’t welcomed because witches and shifters don’t get on.
Minnie has secretly been in love with Kaval Draven and Stone for a long time but with the unrest between witches and shifters and the fact she’s in love with three people Minnie never thought she’d actually have a chance with any of them.
At the party Minnie’s bff Rebecca tries to flirt with Kaval and sets of a strong witch fight that Minnie never thought she’d be able to pull off but because she’s unleashed her potential power three powerful evil witches want her power.
There’s a lot of secret training in woods and eventually naughty bear loving one on one and also all three.
Enjoyed the story and the Minnie finding her inner power but felt at times a bit slow for me that said looking for to seeing if any more RH storyline are developed by one of my favourite shifter writers
This is my first Meghan Kelly narrated book but I do like her voice and especially her differences between the boys in Minnie’s harem

A Reverse Harem of Shifters and Witches an amazing combination! This book starts of with a bang at the Birthday party celebration. Book 1 in the series of PNR world.
This book is definitely a must listen/read because it will draw you in from the beginning of the story.
The narrator does a fabulous job with the characters and voices of the characters. I definitely recommend this book.

Minerva is a witch that lives in Bonfire falls . When she turned 21 her powers went out of control when she got mad . Unable to hide the power she now has enemies are after her for her power.

Kaval , Draven and stone are all bear shifters and friends. They also will do anything to protect the one women that have all secretly loved even if it's fighting dark magic or thier own clan.
Poor Minerva doesn’t know we're to turn to and why this is all happening to her now. She has never been a powerful witch! But she does have 3 hot shifters to protect her.
Love the action , drama, mystery, drama , spice, twists and turns. The characters are great and the story really got my attention. I couldn't put the story down and didn't want it to end. Can't wait to see what the next book in the series is like!

Voluntarily reviewed and I honestly loved it.

Captive of the Bear Clan

Minnie’s 21st birthday day party did not go as planed. Her witch powers spiral out of control. She finds she has hidden enemies in her coven. She gets kidnapped by bear shifter clan. While fighting for her life her 3 friends are by her side the whole time. She finds love is more powerful.

First things first, Meghan Kelly did an amazing job narrating as always, smooth read, different tones. I thought this was great to read, quick, had some spicy scenes mixed in too. Seeing how love can be magical and more powerful than any other magic with whomever your in love with, even if it's with 3 shifters, well that was my favorite part!!!

How did Minerva grow up in a society so full of hate, bias, greed and corruption so completely oblivious to it. She begins her realization of her society’s faults running for her life. Stone, Kaval and Draven team up to help Minnie and protect her. All feel a pull to Minnie, but is it enough for them to be willing to share. I enjoyed this story and I love that each book of the series will focus on a different person. Meghan Kelly did an awesome job as always on the narration can’t wait to listen to more.

After a horrible 21st birthday party, Minerva’s magic is stolen. When Minerva meets 3 bear shifters each with different personalities, 3 different life skills and each vowing to help her get her magick back it becomes dangerous.

Kaval, Draven and Stone are the 3 special men in Minerva's reverse harem lifestyle that befriend her and help support Minerva find her magick and destroy the racial tension and mean girls provoking the town of Bonfire Falls.

Meghan Kelly does a terrific job analyzing and articulating all the different characters. Her ability to change the pitch and tone in her voice allows you to understand which bear is speaking or which witch speaks. Not an easy feat.

In this story we have a young witch who doesn't yet have control over her witching abilities when she reaches the age of 21. She has 3 very good friends within the Bear Shifting Clan and when a catastrophe occurs at her 21st birthday party, they come to her aid.
These young and virile men act as her guardians and very soon love blossoms.
I loved the absolute friendship and trust that built up between all of them as well as the clever way in which the story is told - from all their viewpoints.
The other thing of note is the versatile voice acting of the narrator, Meghan Kelly. When you hear her 'male' voices and the various females ones too, you will know exactly what I mean!
Altogether a most entertaining audiobook story, one which I am happy to recommend.
I requested and listened to the audiobook version and my voluntary review above is unbiased

Such a hot sexy book. Liv and Aria sure know how to write a great book. Excellent characters. Meghan, yet another fantastic performance.