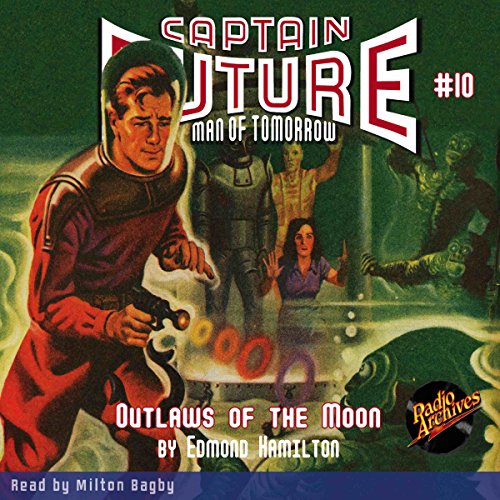 Captain Future: Outlaws of the Moon

By: Edmond Hamilton,Radio Archives
Narrated by: Milton Bagby
Free with a 30-day trial

Curt Newton leads his valiant band of Futuremen in the thrilling campaign to preserve a priceless Lunar heritage! From the pages of classic pulp, Captain Future flies into action, displaying the most exciting aspects of science fiction. Although modeled to a degree after Doc Savage, Captain Future is also the ultimate space opera hero. Coming complete with not only a tragic, yet inspiring origin story driving him into defending interstellar justice, everyone and everything Curt Newton encounters is colorful, vibrant, and over the top, definite trademarks of the best space opera. Although an orphan, Curtis Newton's parents left him with gifts that would most definitely lead to him becoming Captain Future, the superman of the spaceways. His mother, Elaine, provided him with his mission, to become the protector of the solar system, to fight for justice wherever it may take him. Roger, his father, not only passed on incredible genius and scientific skills, but he provided him with three caregivers that would grow to be the greatest team a space faring hero could have - the Futuremen! The Futuremen all have their origins in the Moon Laboratory that is both home and headquarters to Captain Future. Referred to as a "citadel of science", the Moon Laboratory is designed in a circular fashion and contains quarters for the Futuremen, even though not all of them, such as Grag, actually require rest. A reference library containing the vast knowledge of the universe, the Brain's personal lab, a large room that serves as both workspace and social area with a glassite window as ceiling, and many other rooms make up the Moon Laboratory, definitely the perfect place for an interplanetary hero to call his own. Rocket into science fiction adventure and discover new worlds. Ripped from the pages of the spring 1942 issue of Captain Future magazine, "Outlaws of the Moon" is read with wonder and excitement by Milton Bagby.

What listeners say about Captain Future: Outlaws of the Moon