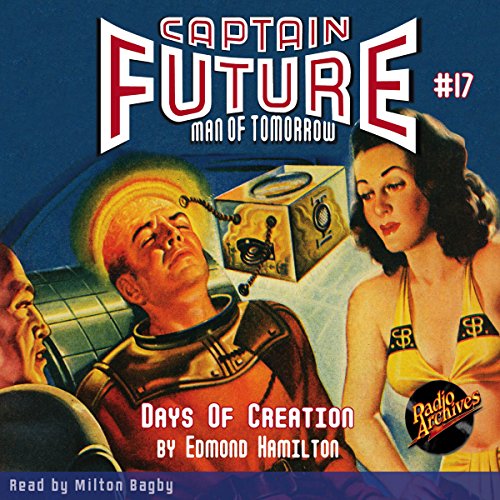 Four powerful factions work at cosmic cross purposes in a game of system-wide stakes as Curt Newton and his staunch comrades set out to create a brand new planet to add to the family of the Sun! Mort Weisinger, Thrilling Publications' go-to Science Fiction Editor, presented author Edmond Hamilton with a concept for a futuristic hero cast in the mold of Doc Savage. This was a calculated move, as Hamilton had already built a strong reputation as a popular writer of space opera. Hamilton took the rudimentary odds and ends that Weisinger had come up with and stitched them together into Captain Future, using another series he'd written - The Three Planeteers, as a blueprint. For this reason, Edmond Hamilton is credited by many as the creator and writer of Captain Future, and rightfully so. Hamilton did pen the majority of the stories, but Joseph Samachson also wrote two Captain Future stories and Manly Wade Wellman wrote one. Five of the Captain Future tales carry the byline 'Brett Sterling', which was a housename used for a while that both Hamilton and Samachson wrote under. Most definitely science fiction space opera, the Captain Future stories go beyond that as well. A traditional Pulp hero in many ways, Captain Future also proved to be a character that readers could easily relate to. His involvement in the quest for justice is equally driven by his natural curiosity, the desire to explore and learn. He also clearly sees those closest to him, particularly the Futuremen, as family, and reacts to them in that way. The stories are also peppered with humor, including the ongoing war of words between Otho and Grag as well as absurd encounters with strange beings. Rocket into science fiction adventure and discover new worlds.