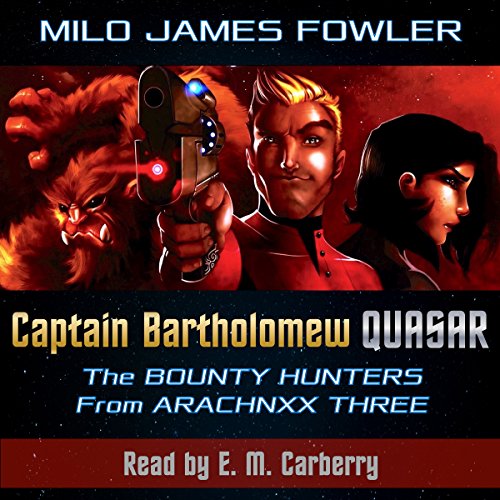 Captain Bartholomew Quasar and the crew of the Effervescent Magnitude are on their maiden voyage - and on the run from dangerous bounty hunters eager to collect a reward on the captain's head. Just when Quasar thinks he's escaped them, his ship is stranded in the middle of a heated civil war in an unknown corner of the galaxy. Quasar must rely on his wits, his charm, and his resilient crew in order to survive the ordeal that follows, culminating in an epic space battle where sworn enemies must join forces to repel an even greater threat.

Captain Bartholomew Quasar:The Bounty Hunters from Arachnxx Three by Milo James Fowler and narrated by E.M. Cranberry is an audible book I requested and the review is voluntary. This book is full of total good balls running around in space. I am glad Earth doesn't depend on them. It's a short book but a very clever one with fun characters and situations, witty dialogue, and unique plot. Definitely worth the listen! I enjoyed the craziness!
The narrator was pretty good too!

This appeared to be a Spoof on the old Startrek type outer space story. Amusing to some extent but I do no believe I will continue with this author in the future.

The story begins with blunders from within. At each turn of events, the Captain steps into a bigger mess, but will it ever end. With the threat of death looms ever before him and around each nook and turn on alien turf, he is bound to resolve the situation. With the approaching dreadful alien spiders and this daring alien queen, he's got his hands full. Thankfully, the enemy of my enemy becomes the catylist for joined forces that has never been considered in many lifetimes. But what will he do when it is over and the smoke clears? Will he have to face this obstinant queen who is beginning to take a liking to him, but who repulses every fiber of his soul? You will have to read the story to find the answer from an unlikely source.

The story is fun and exciting as I listened as each chapter unfolded. You will too. Nice work indeed.

Captain Bartholomew Quasar is a funny space farce reminiscent of shows like Galaxy Quest and the Orville. The story is entertaining with interesting characters including a variety of alien species.

Audio is really the way to go with this book- the narrator fits the story perfectly.

I received a copy of this audio book as a gift. This is my honest and voluntary review.

Creating species with impunity, author Milo James Fowler exercises his considerable flare for snark and satire as he wittily skewers Bullwinkle's pal Dudley while providing "magic" technologies borrowed heavily from Star Trek (and with nods to any number of other influences). As I listened to narrator E.M. Carberry gleefully provide full pomp and circumstance (as well as clever voicings for the various aliens encountered) I enjoyed a few full belly laughs following Captain Quasar blundering his way across the universe, leaving mostly carnage in his wake.

written in the style of episodic Cliffhangers from the old Saturday afternoon movie shorts of a bygone era. You will recognize many tropes. fun without insulting anyone.