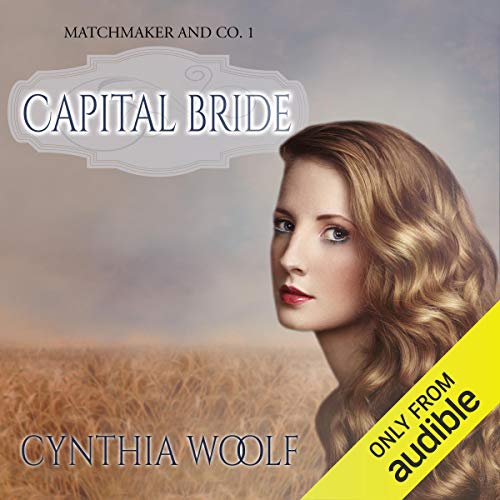 Unexpectedly homeless, unwed mother Sarah Johnson has few options. They could go live with her cousin William, but Sara believes there's something untoward about his offer and it leaves her feeling uncomfortable. She's qualified to be a governess, but no one will have her because she wasn't married when she had her precious MaryAnn. Matchmaker & Co could be her salvation as mail-order-bride to Mr. John Atwood.

Single father John Atwood is raising his daughter the best he can in the wilds of the Colorado Territory, but knows he needs help. No woman he knows wants to take on the raising of his daughter who hasn't spoken since she saw her mother brutally murdered during a bank robbery. Can Sarah, John, and their two daughters overcome their pasts and find happiness together?

What listeners say about Capital Bride

No imagination. Must have been written in a day. 21st century language in a 1800's historical novel: "Scared the crap out of me", "I'm pregnant, not disabled". Hard to believe they publish this middle school level of writing.

This is a great book. The narrator did an amazing job with reading and the story keeps you guessing. I can’t wait to continue this series and will recommend it to my friends!

This is a great book. It holds your attention. It has a good story line. Cynthia woolf is an excellent writer. Lea Frederick does an excellent job narraiting this book. If my review was any help will you please click the helpful link. Thank you

While I liked the story characters and plot, the narrator's voice reminded me of my aunt's, who is a near 80 year old midwestern nun. Some of the dialogue between characters is too modern for the 1800s. Though it may seem counterintuitive, I think implying the sex is more titillating than reading (or hearing) about nipples "popping" out of mouths or being "impaled" by one's member. So, to have the graphic sex scenes read in Sister Eighty's voice was especially off-putting. Otherwise, a good story line.

This is a great short story with well written and narrated. I particularly liked the children. The abrupt apprehension of the bank robber and the sudden turn of the cousin to a sadist needed more substance. Still great story

When reading a mail-order-bride novel you know what to expect about the story...bride ordered, bride accepts and bride travels to the unknown. Most of the circumstances with the brides is due to lack of men or lack of employment (on the brides side). Or lack of women and need for child-bearing women and cooks for men of the wild west (late 1800's) (on the men's side).

But at a period of time when a young women makes a mistake in life and become in the family way, it was hard to procure a husband back then and mostly the only way was to accept an invitation from a man desperate enough for any woman to be their bride, or just don't tell the man you were never married and let be an omission of facts where the child came from.

However, what happens when and if the man finds out after the fact? Capital Bride tells one point of view.

I love mail order bride books and this one did not disappoint! As a parent myself I really enjoyed the parenting aspects included - it was so interesting to me to read about the struggles the characters persevered through and how in the end, despite all the negatives, they were able to come out on top!

Will a Crazy Cousin Win?

Lia once again read a magnificent Audiobook story that grabbed my heart.She is a wonderful narrator.

Sarah goes to a Matchmaker to sign up to become a Mail Order Bride. She is matched with a man named John.

However she has a crazy cousin who demands she leave John and go with him. Why? What does he do when she refuses? Can John protect her?

Another great story. I hope there are more Audiobooks coming in this series.
I look forward to listening to more. I highly recommend that you get this excellent Audiobook.

Sara Johnson's aunt died leaving her and her five year old daughter homeless. Unable to find a job, Sarah decides to apply at Matchmaker & Co., as a Mail-Order Bride. John Atwood, a Colorado rancher, sends to Matchmaker & Co for a bride. His wife had been killed years earlier, and he wants a wife for himself and a mother for his seven year old daughter, who had not spoken since her mother's death. This is a very good book and I enjoyed listening to it and I believe you will too.

I enjoyed this story. It flows nicely, with just enough Sparks to keep me intrigued to the last chapter. I recommend this book.

Very predictable in that they they got married he was a ranch owner had plenty of men to run the ranch.
The little girls were friends from the start. The mail harder bride got shot by someone she thought of as a brother.
Her husband realised how much he loved her. Shot the other one she had a son and lived happy ever after