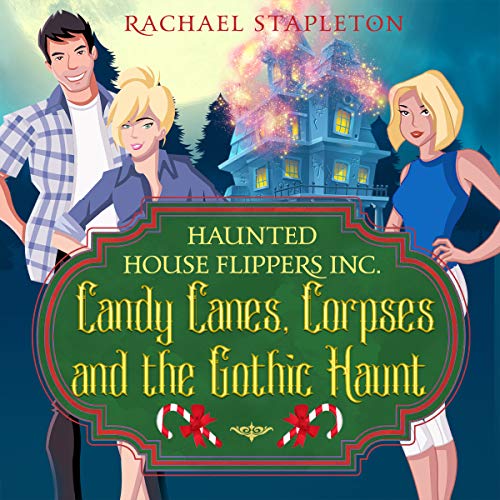 By: Rachael Stapleton
Narrated by: Ellora Sen-Gupta
Try for $0.00

House flippers Jack and Juniper are planning to ring in the New Year slinging tapas, vino, and beer in their latest purchase, an old Victorian mansion that they've transformed into Bohemian Lake's first inn and taproom, but the mansion's poltergeist is out to dash their merriment with mean-spirited sabotage.

Having laid otherworldly rumors to rest before, Juniper is skeptical, but the alarms aren't going off and, besides, who else would want to throw a wrench into the works - Jack's ex-girlfriend, another business owner, or the local historian who's scheduled a town meeting to protest the flippers' plans for the home.

When the mischief turns deadly, Juniper calls in a part-time paranormal investigator but the man's discoveries leave her thinking that her problem is more personal than paranormal. Between the Christmas holidays and training her new staff, Juniper doesn't have time to track down a murderer, but with the "ghost of the manor" constantly coming out of the woodwork, she doesn't have much choice.

Opening day is fast approaching and the "woman in white" has led her to yet another stiff in the cellar. Now Junie and her merry band of Bohemians must nail down a murderer - before their Christmas goose is cooked. It's the most wonderful time to get wrapped up in a spirited holiday murder! The corpses are piling up, and there's a Grinch out there riling up the town against the new Gothic Inn. It's the most wonderful time to break-in!

What listeners say about Candy Canes, Corpses and the Gothic Haunt

I JUST DISCOVERED THIS SERIES, AND IT APPEARS TO BE ONE THAT GETS BETTER WITH EACH BOOK. THE FIRST WAS FUN. THIS ONE BETTER. I AM ABOUT TO BUY BOOK #3. I WAS DELIGHTED TO LEARN THIS NARRATOR CAN SING. WELL DONE.

Candy Canes, Corpses and the Gothic Haunt is the second book in the Haunted House Flippers Inc book series is a fun cozy mystery and improves upon the original in almost every way. Ms. Stapleton does a good job of weaving a clever mystery. I actually figured out who the bad guy was as soon as they showed up in the story, but it was still a fun story and Ms. Stapleton threw out plenty of red herrings that will likely keep plenty of people guessing until the end. These books are quick enjoyable reads/listens and I will definitely keep my eyes on the series.

Another enticing read. You just never know where this story will end up. All the great things needed for a great mystery Christmas read. Can’t wait to see what happens next with Juniper and Jack!

So, this is the second book in the Haunted House Flippers, Inc., series by Rachael Stapleton, and much like the first, a fun, comfortable listen. At present, the author has 3 cozy mystery series set in the town of Bohemian Lake all focusing on different characters featured in supporting roles in the other novels. It is almost like living in Bohemian Lake and keeping up with your neighbors.

In this series, the stories are set around holidays, this one being Christmas. Juniper Palmer and her business partner, Jack Young, have decided to turn their restored Victorian mansion that they initially purchased in Corsets, Corpses, and the Deadly Haunt (Book 1) into an inn and taproom, now “The Gothic Haunt.” As their grand opening set for New Year’s approaches, strange problems in the home keep popping up: cut exhaust lines, missing vacuum breakers, stolen Christmas gifts, and then Junie finds Head Chef and friend, Feliz Merlot, dead in the wine cellar. Although the coroner says his death was an accident, Junie is sure Feliz was murdered. Right before he died, Feliz had asked Junie to come to the inn because he had discovered who was behind all the problems. On her arrival, she had found food cooking on the stove – something Feliz would never have left unattended.

The story continues with Junie trying to discover the truth behind Feliz’s death, get the mansion ready for its upcoming grand opening, and the growing romantic relationship rekindling between her and Jack. We are treated to the inclusion of Junie’s friends – Pike Hart, Penny Trubble, Eve Banter, and many other familiar faces. Also making an appearance from the earlier book is Victoria, the ghost of the murdered bride of the home’s original owner. This book is recommended for the cozy mystery reader that also enjoys a bit of the “woo woo” in the mix.

Candy Canes, Corpses, and the Gothic Haunt: Haunted House Flippers Inc., Book 2 (Bohemian Lake, Book 4) by Rachael Stapleton, narrated by Ellora Sen-Gupta is one of three mystery series all set around Bohemian Lake. I love this idea for a series, as a whole! I feel like I'm the "all-knowing" neighbor who keeps up on all the happenings at Bohemian Lake. While this audiobook could stand-alone, I highly recommend you heighten your experience and get to know all the characters that live here because they make appearances in each series - I promise, you will find your favorites! Rachael Stapleton has done an amazing job with the entire Bohemain Lake series! This one, The Haunted House Flippers Inc series, is unlike any other cozy mystery I've read. Its fast-moving plot is unique, funny, and filled with fun, lovable characters. Complete with renovations, resorations, and murder, there's definitely never a dull moment at Bohemian Lake!

The Haunted House Flippers series focuses on business partners (and romantic love interests), Juniper and Jack, and Book 2 takes place around Chrismastime. With the grand opening of their Victorian mansion, The Gothic Haunt Inn and Taproom, set to open on New Year's, Juniper has no time to waste. But, when odd occurrences keep popping up, including murder, Juniper realizes she needs to get to the bottom of what's been going on or there might not be any grand opening at all! Who would do these things and why? Isn't this supposed to be the most wonderful time of the year?

Ellora Sen-Gupta's narration is great. Everything is of professional quality with no interruptions or unnecessary pauses. Her pace is perfect, and she speaks clearly. This made for an enjoyable listening experience, and I'm happy I chose the audiobook over reading it. She also narrated Book 1 of this series, which I thought was excellent! When the next Haunted House Flippers audiobook is released, I'm looking forward to hearing her again.

I give Candy Canes, Corpses, and the Gothic Haunt: Haunted House Flippers Inc., Book 2 (Bohemian Lake, Book 4) by Rachael Stapleton, narrated by Ellora Sen-Gupta a rating of ~4.5/5 stars overall. I recommend this book and series to cozy mystery fans, as well as lovers of the paranormal genre. With the holiday season quickly approaching, this would be the perfect audiobook to add to your library collection. I'm looking forward to finding out what happens next at Bohemian Lake; I'll be here, eagerly waiting on the next release!

Thank you for reading my review. I hope it was helpful. :-)