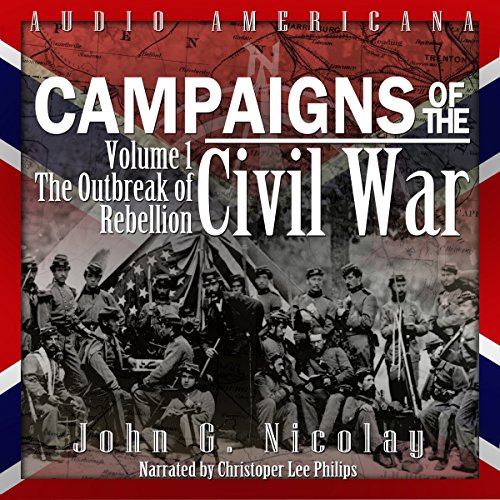 Campaigns of the Civil War, Volume 1

A landmark of Civil War History, The Campaigns of the Civil War series was originally published in 1881, and has often been reprinted in facsimile editions. The series still remains of interest to historians for its eye-witness accounts of political and military events, as well as its portrayals of the soldiers and statesmen who waged the conflict.

The Outbreak of Rebellion is the first of 12 volumes in this series to be produced in audiobook format by Audio Americana.

John G. Nicolay was private secretary to Abraham Lincoln in Illinois and followed the president-elect to Washington D.C. where he continued to serve President Lincoln throughout the war. While modern historians may find Nicolay's objectivity occasionally wanting, especially in his vociferous condemnation of the southern "conspiracy", his contemporary account of the secession of South Carolina, the surrender of Fort Sumter, and the retreat from Bull Run provide the sort of vivid, first-person recollections that make The Outbreak of Rebellion an enduring classic, and the Campaigns of the Civil War series a cornerstone of Civil War literature.

What listeners say about Campaigns of the Civil War, Volume 1

Not Just Another Civil War Book

This book stands out from the crowd because of it's declared bias. An interesting insight into the Unions position in the run up to war.The performance and sound quality could be better.