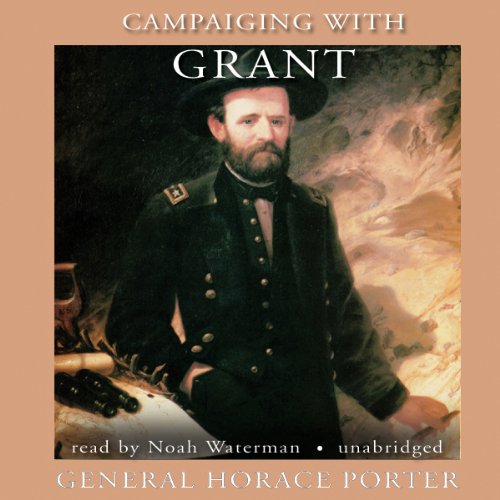 By: Horace Porter
Narrated by: Noah Waterman
Try for $0.00

Horace Porter served as lieutenant colonel on Ulysses S. Grant's staff from April 1864 to the end of the Civil War. He accompanied Grant into battle in the Wilderness, Cold Harbor, and Petersburg campaigns, and was present at Lee's surrender at McLean's house. Throughout the war, he kept extensive notes that capture Grant's conversations, as well as his own observations of military life.

Porter's portrait of Grant is the most comprehensive first-hand account that we have. We see Grant as a soldier and hear in his own words the tactical evaluations that led to many of the war's key decisions. We also hear of Grant's dealings with Lincoln, of the close relationship between Sherman and Grant, and of Lee's noble bearing at his surrender. This is a stirring account of our country's most memorable conflict.

What listeners say about Campaigning with Grant

This review is of the reading, not the classic book. Mr. Waterman RACES through this reading with little effort to impart the character of the work to the performance. He seems to actually be racing through the book. Runs out of breath from time to time and actually gasps to regain it. Terrible treatment of Horace Porters excellent and entertaining account of his time with U.S. Grant.

I’m mostly writing this just to let people know that I think this recording was sped up and the appropriate speed for me was 0.75x. At that speed it sounds like I would expect and turned out to be an incredible book and good performance.

Great book, narrator not so good

The subject matter and flow of the book is good. It seems well researched compared to other works in the same vein. My problems was that the narrator is trying to read very fast, and for me it just doesn't work.

Campaigning with Grant is Gen. Horace Porter’s account of his time on Gen. Grant’s staff from April 1864 to the end of the Civil War.

Perhaps not for everyone, but for anyone who likes history and admires Grant, this book is a gold mine.

Porter’s account was published in the 1890’s, after Gen. Grant’s death. It is written by an obvious admirer. You will have to look elsewhere for accounts of alleged drunken behavior.

You will find many details of Grant’s tactical acumen and decisions, his character traits which engendered great loyalty, and anecdotes of conversations which are informative and entertaining.

This may be one I come back to for references in the future. It was enjoyable.

great history, but slow it down to eighty percent.

the book is a good historical emotional content book that gives great context to all the history and detail books you could read about grants campaigns. however I believe the book was accidentally sped up because 80% speed it sounds perfect.

Interesting Insights into the Campaign

While the details included are great, I found the reader overdramatic at times. Grant has been underrated as a strategist mostly due to pro-South historians.

This book covers primarily Grant's later military career, i.e.,the period of his 1864 Overland Campaign to the end of the Civil War. It shows all the marks of a book published in 1897 in that the language is a bit stilted for modern readers to completely enjoy. It also suffers from having been written by a hero-worshiping member of Grant's staff who tends to smooth over any weaknesses or failures that a modern historian would point out. Porter's coverage of Grant's performance at Cold Harbor is especially suspect.

The reader, Noah Waterman does a nice job for the most part with a good, flat Midwestern accent but does have some understandable difficulty with certain southern river names such as Totopotomoy and Mattaponi.
Additionally, he read the work rather rapidly for my tastes.