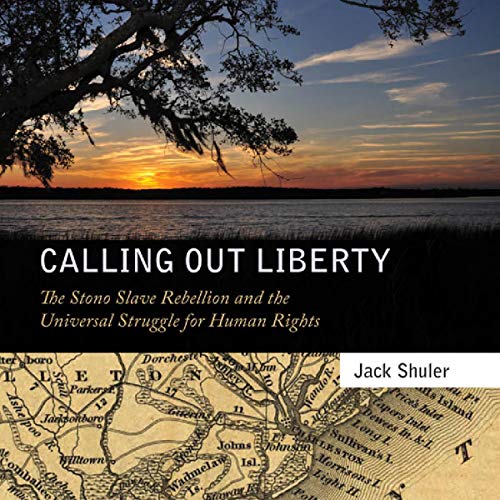 By: Jack Shuler
Narrated by: Kirk Winkler
Try for $0.00

On Sunday, September 9, 1739, 20 Kongolese slaves armed themselves by breaking into a storehouse near the Stono River south of Charleston, South Carolina. They killed 23 white colonists, joined forces with other slaves, and marched toward Spanish Florida. There they expected to find freedom. One report claims the rebels were overheard shouting, "Liberty!" Before the day ended, however, the rebellion was crushed, and afterwards many surviving rebels were executed. South Carolina rapidly responded with a comprehensive slave code. The Negro Act reinforced white power through laws meant to control the ability of slaves to communicate and congregate. It was an important model for many slaveholding colonies and states, and its tenets greatly inhibited African American access to the public sphere for years to come.

The Stono Rebellion serves as a touchstone for Calling Out Liberty, an exploration of human rights in early America. Expanding upon historical analyses of this rebellion, Jack Shuler suggests a relationship between the Stono rebels and human rights discourse in early American literature. Though human rights scholars and policy makers usually offer the European Enlightenment as the source of contemporary ideas about human rights, this book repositions the sources of these important and often challenged American ideals.

What listeners say about Calling Out Liberty