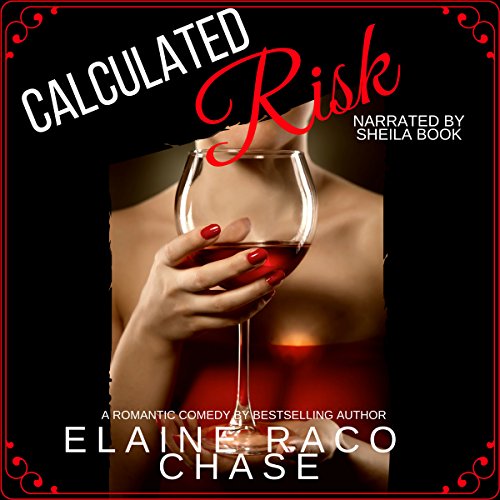 Thus in one of Nashville's poshest restaurants began a stream of threats against Stephanie Brandt along with a heavy hand 'mangling' her shoulder, followed by a bill shoved into the middle of her quiche by a big man wearing work boots, denim and a T-shirt with an obscene foreign word printed on it.

Until Quintin Ward stormed into her life with his threats and accusations, Stevie had not known his son Rob even existed., let alone was her mail room clerk.

When she's finally able to convince Quintin that she has no designs on his son, they embark on a campaign to squelch Rob's amorous ideas and fantasy love-life with his boss. But their very calculated risk backfires!

What listeners say about Calculated Risk

Had to recharge my headphones

Would you listen to Calculated Risk again? Why?

Yes I would listen to this book again, just to find out what I'd missed the first time round.

Which character – as performed by Sheila Book – was your favorite?

I love improbable and fantastical premises in romance: the ability to dive into another person’s life and experiences with situations that I would never encounter in my quiet little life. Even more interesting and enjoyable for me are the stories that take an almost credible situation, and spin it into a story that is engaging, well told and has moments of laugh out loud humor. Elaine Raco Chase has managed to check off all those little boxes in this story, cleverly narrated by Sheila Book.

Stephanie (Stevie) is a woman who worked diligently to make it in the boy’s club world of Nashville Music producing. A mailroom intern, lost in the throes of his first major crush has brought his father to confronting her about her lascivious intentions. While Stevie is understandably distraught at the negative attention, she also is aware that this is a phase for the boy, if only the father will see that.

A cockeyed plan is hatched to break the teen’s crush…yet all is never quite that simple. More suited to the father than the teen son, Stevie’s thoughts and attraction is turned to the father, electricity is clearly defined and the steam rampant in the latter half of the story.

Sheila Book is the narrative voice in this story, and she manages to incorporate small tempo and pacing changes with minor pitch inflections to narrate the story. Additionally, interior monologues are treated with an ‘open room echo effect’ that distinguishes the perspective. I’m slightly torn about the technique, it took several instances for it not to become a jarring change in the listen, but once acclimated the distinction was clear and felt more natural.

I’ve repeatedly asserted that Chase writes a fabulous dialogue that is loaded with witty repartee, clever comebacks and feels completely natural. There is no lack of that skill in this story, with dialogue that ping-pomgs back and forth between the speakers, incorporating snarky and smart responses, double entendre and several moments for processing for both parties.

These are purely fun and light romances that are heavy on description and scene establishment, solid character building and sexual tension and engagement that adds steam and substance to a very enjoyable listen.

I received an AudioBook from the author for purpose of honest review. I was not compensated for this review: all conclusions are my own responsibility.

This was funny and entertaining. Quintin accuses Stevie of having a relationship with his son, a teenage employee that she barely knows. Rob, the teen in question, has a huge crush on his boss and Dad hatches a plot to make his son sick of her. Of course Dad and the boss end up falling in love in the process. Neither wants to hurt Rob. They both have visions of teen suicide and runaways and are afraid their relationship will push him over the edge, so they sneak around behind his back. Sort of a silly plot, but it is funny. Stevie's dates with Rob are hilarious. The narrator does a great job with it. Very enjoyable.

What disappointed you about Calculated Risk?

I am not sure if this book would have been any better if someone else read it...narrater was awful the story not much better. Not worth the money, so glas I was able to return it! Couldn't even finish the book it was so awful.

Not sure I would even care to.

Who would you have cast as narrator instead of Sheila Book?

Anyone would have been better than her.

If you could play editor, what scene or scenes would you have cut from Calculated Risk?