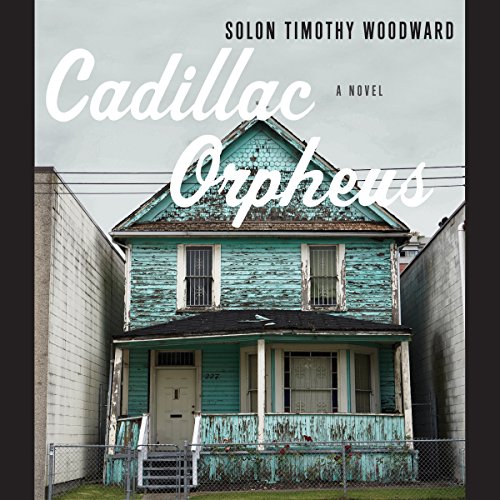 Jesmond Toak works as a repo man in the fictional town of Johnsonville, located in a hurricane alley on the Florida coast. He has a troubled relationship with his father; their pastor's gay son, Bayonne, has become implicated in a suicide by gas asphyxiation of his boyfriend; and the woman Jesmond loves, Peaches Raymond, is married (to a threatening man they call "Special Ed"). As various deaths, disasters, and disappearances occur in the days leading up to the arrival of Hurricane Aretha, Woodward ties together these unruly plot points with madcap glee.

As lyrical as Charles Baxter, and as sexy as Zane, Woodward writes with an agile maturity that belies his status as a first-time novelist. Cadillac Orpheus is a crafted, genre-defying romp, by turns terrifying, hilarious, brave, brazen, and above all, sincere.

What did you love best about Cadillac Orpheus?

The narrator Dion Graham is perfect for any audio book. That and the story, though at times confusing since it jumps backwards and forwards seemingly at random points depending on a character's perspective, reminded me of Toni Morrison's writing style.

What other book might you compare Cadillac Orpheus to and why?

Which character – as performed by Dion Graham – was your favorite?

Nearly every character is soiled morally. I thought the character Sharon reminded me of someone I used to know which stuck with me. The cast of old players at the "He Ain't Here" bar were hilarious!

The way the story weaves around a community and it's people reminded me of how stories are swapped and exchanged at neighborhood barbershops. The characters seemed very real and flawed which I generally go far. People are greedy, vindictive, cruel and petty but at the same time we at least try to do the "right thing".

This was very enjoyable audio book. I know the reviews haven't been kind and it may require a second listening since the story is not straight forward. It bends and twists but is ultimately satisfying.

The reader had a monotone voice and the female voices performed by a male was not done very well they all sounded the same, so it was hard to follow the activity of various characters. I didn't know who was who & the story was disjointed

Thid book is so confusing...

This book is very hard to follow, i dont recommend any one waste there time or money in this book, sure the synopsis seems interesting but so not worth the listen, this story heads in so many directions it is hard to keep up, i gave up at chapter 10.