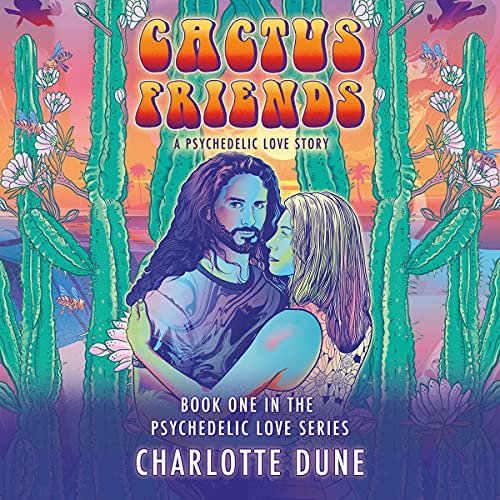 Plant medicine plus passion in this nonstop steamy and tropical adventure.

A struggling photographer Thelma searches for direction in her life. She is drawn to a group conducting plant medicine ceremonies on a mysterious farm in Florida’s southern Everglades. After drinking a mescaline tea made from the San Pedro wachuma cactus with the group, she receives an unusual message and meets a young Persian man suffering from kidney failure, named Saman.

Together, they unravel the hidden meaning of Thelma’s prophetic visions, a path that leads to Thelma’s past and to Saman’s future. In Cactus Friends, Charlotte Dune creates a story rich with supernatural energy and imagery, taking the listener inside the world of underground shamans, psychedelic encounters, and wachuma - or huachuma - and ayahuasca ceremonies. Cactus Friends uncovers the power of romances old and new and traverses the unbreakable threads that connect some lovers across time and space.

What listeners say about Cactus Friends

This was my first read by Charlotte Dune, and won't be my last (I am looking forward to Mushroom Honeymoon). I listened on Audible and the author did a great job narrating (though I would have liked a bit more variation in the male voices; however the author has a smooth, comforting voice that made for very easy listening). I immediately felt engaged with Saman and Thelma as I was dropped into their vibrant world. With the strong voice, evocative setting, and emotional journeys, it was a more serious read than lighthearted, but don't let that deter you. Both characters were relatable with realistic backstories and journeys, and I appreciated the secondary characters, too. It was also interesting to learn about the medicinal and healing properties of plants and psychedelics.

This story was so good, I listened from start to finish! Thank you Charlotte Dune for creating such a beautifully psychedelic love story ❤♥