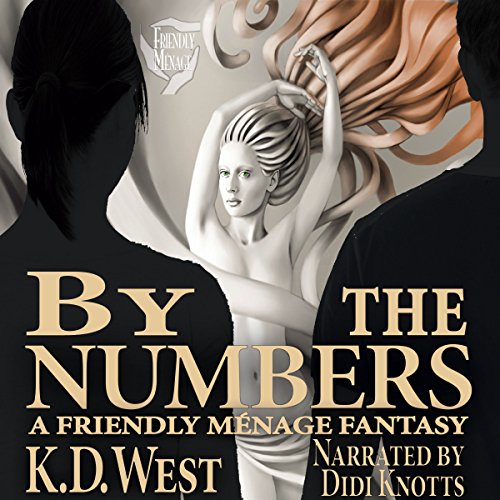 Jen and Jack's marriage is magical - in more ways than one.

When they were young, Jack and Jen fought and won a war, and came out heroes. Then they got married, got jobs, raised kids, and lived, for the most part, happily ever after.

But Jen's childhood best friend has been missing for nearly 20 years, and Jen's beginning to give up hope.

A game of very adult let's-pretend leads to a discovery that is very magical indeed, but that could destroy Jen's life.

Or could lift it to a whole new plane.

What happens when rediscovering your youth leads to discovering something altogether new about yourself?

What listeners say about By the Numbers

I was provided this audiobook at no charge by the author, publisher and/or narrator in exchange for an unbiased review. PSA: This is not a Wizarding World Story for the younger generation. Nope, this is pure eargasmic fun listening for the more mature only. I was surprised how fun this audiobook was to listen to. It reminded me of the World of Harry Potter (which I love as an adult) but with erotic eargasmic additions. I have listened and reviewed many audiobooks that have been disappointing. The cover and title of this audiobook didn't grab my attention as one I would enjoy, and was afraid I would have to suffer through it to post an honest unbiased review. But I loved it! This was my first experience with K.D. West as an author and Didi Knotts as a narrator. They didn't disappoint. If you love the fantasy world of the likes of Harry Potter and erotica romances, you will enjoy this audiobook. It's a must listen.

I listened to the whole thing in one day — and now I'll have to go back and listen to some of those sexy-fantasy bits again. :-)

What was one of the most memorable moments of By the Numbers?

There are a bunch! One that stands out comes toward the very end. The point of view character and her husband have been engaging in all sorts of wild, fantastic (that word again!) games, and then they find themselves alone, and together... And it's just really lovely.

She's got a wonderful, smooth voice that manages to convey both what's happening — from funny to scorchingly hot — but also all of the characters' emotional states. I'll definitely look for more books read by her!

There were a number of times that I found my breath catching. Early in the book, Jen (the point of view character) is talking to her long-lost friend about all of the things that she's missed... and yeah, I had to reach for the tissues. Definitely.

On one level, By the Numbers is a sex fantasy about a happily married woman (Jen) getting to explore a love she never knew she could have had — she gets to have her cake and be eaten too.

On another level, this is a book about coming to terms with growing up and growing older — looking at the choices you've made and the opportunities you've chosen to give up. There's a beautifully melancholy, bittersweet quality to the book that makes the sex incredibly moving — it's never just about the sex. (Though the sex is great! And the narrator does a beautiful job of conveying it!)

The magical world that KD West created here is rich and dense. I hope we get to see more stories in this universe!

The narrator is all kinds of Fantastic, and I intend to look for other readings by her.
The story, however, has issues. It reads like Harry Potter fan fiction, with enough changes to avoid copyright conflicts. The situation that sets up the ménage is deeply creepy and borderline abusive - these people have no business "fooking". Maybe it's just my sexual politics, but I really couldn't get past the completely inappropriate nature of the relationship to enjoy the sex.

Angry and cheated want my credit back, pity i can't get my time back as well.