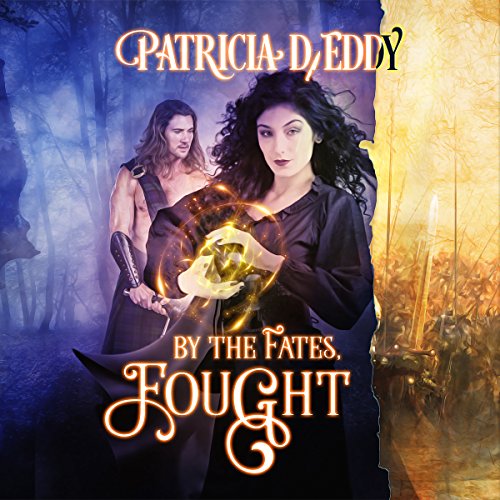 By the Fates, Fought

I lived a nightmare for 10 years. Until Raven saved me. Now, I wake each day in my mate's arms. I should be happy. But I can't shake the fear that a storm is coming. Devils joined King Eideard's Guarda. They watch me. Hover outside my shop.

The Clan Kendrick, full of men who haunt my dreams, mentioned a mystical artifact to Faolan's spies. Faolan believed my life was once again in danger. Except the clan didn't come after me. Now, I have to destroy them. The prophecy confirmed that I'm the only one who can.

Clan Kendrick went after those I love. I don't know if I'm strong enough to beat them, but I have to try.

By the Fates, Fought is the third novel in the By the Fates series. It contains several dark scenes, including brief descriptions of rape and torture and is meant for mature audiences over 18. It ends on a cliffhanger.

What listeners say about By the Fates, Fought

it's the first fantasy I've really enjoyed and I like patricius writing.
however what gets me is that the protagonists magic is always stronger and the heroes and heroines always go out on their own which doesn't make sense. they will never seem to be able to win it is lucky that the bad guys are stupid.
I did find a lot of it frustrating because of the obvious but hey... it's fantasy.
Shall finish the series just so I know how Patricia sees it however I do prefer her away from the keyboard series so much better and the change of narrators seemed to be ok they both did a very good job