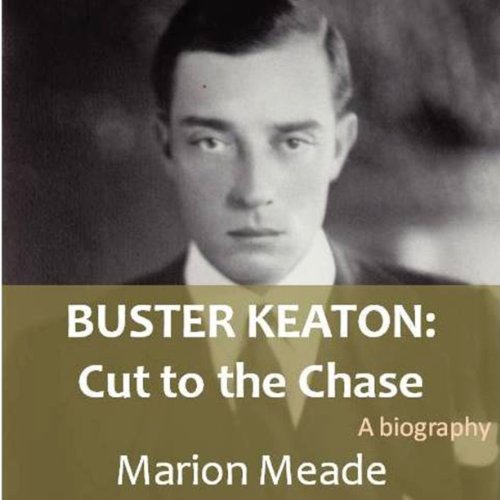 By: Marion Meade
Narrated by: Douglas R. Pratt
Try for $0.00

Buster Keaton (1895-1966) was a brilliant comedian and filmmaker who conceived, wrote, directed, acted, and even edited most of his ten feature films and nineteen short comedies, which are perhaps the finest silent pictures ever made. With a face of stone and a mind that engineered breathtakingly intricate moments of slapstick, Keaton has become an icon of the American cinema.

Marion Meade's definitive biography explores his often brutal childhood acting experiences, the making of his masterpieces, his shame at his own lack of education, his life-threatening alcoholism, and his turbulent marriages.

Based on four years of research and more than 200 interviews with notables such as Billy Wilder, Leni Riefenstahl, Gene Kelly, Douglas Fairbanks, Jr., Irene Mayer Selznick, as well as members of Keaton's family who had previously refused to discuss him, Buster Keaton: Cut to the Chase is a startling and moving account of the troubled life of a cinematic genius.

What listeners say about Buster Keaton

Buster was the definitive working showman. Throughout his 70 years, he never stopped working - never stopped being funny. Euros and film students alike call him a genius, which Buster thought was bull$hit.

He learned to make a mess of his personal life from his abusive, alcoholic father but he lived for his work and was a true American original. Follow him from child vaudeville star to living legend of the movies. Keaton was one of the founding fathers of the movie and helped invent early Hollywood

Buster Keaton, in black and white

This is a fairly straightforward account of the highs and lows of Keaton's family and professional life. It's a well researched book and I learned a lot about the silent film legend. This said, I feel like some of the magic of his onscreen persona is missing here. The prose is functional, but not especially inspired. Mr. Pratt's narration doesn't help. It is clear and easy to understand, but he’s informal to the point of sounding like one's next door neighbor or a friendly uncle reading the book, sometimes making brief, awkward pauses. Personally, I think this audiobook would have benefited from a smoother narrator who was able to communicate the kind of playful elegance that made Keaton a star. It’s a very informative biography, however, so I do recommend it to his fans. I'm very happy to have listened to it.

I so enjoyed this book. I didn't know about the ups & downs Buster Keaton went through in his life. Despite the mistakes and failings in his life, I came away really LIKING the man. The author painted a picture of an early comic genius who managed to retain his humility throughout life, and keep picking himself up after failures. Amazing story.

A great book about an amazing genius.

I am a huge Buster fan and learned so much about him in this book. Additionally, I learned even more about the world and people around him and the times that he he lived in. A very well written book.

Great overall history of one of the greats

I had a hard copy of this book years ago and wanted to refresh my memory of the great Buster Keaton and couldn't be any happier with this audio book.

How Bad Could It Be? I Asked Myself

What would have made Buster Keaton better?

I knew this would be trashy going in, but I didn't understand how truly reckless and mean-spirited Meade's treatment would be.

Within the first third of the book, the author armchair diagnoses Buster Keaton with Dissociative Disorder, megalomania, and illiteracy. She uses thin to no evidence for the first two assertions, and the evidence she uses for his inability to read and write would make most performers (used a ghostwriter for his autobiography, relied on others to read incoming scripts and advise on their worthiness) and internet commenters (bad spelling and grammar in a single note to a gossip columnist) illiterate. She heavily quotes one industry insider saying Buster returned contracts and legal documents unread or improperly signed, which further highlights everyone else's - including his own - admissions that he was the worst, least interested businessman of his era's comic stars.

In a single passage Meade paints Buster Keaton as an insufferable child star who would never be cured of his insatiable, destructive need for attention, and then refers to his reputation as a teenager among fellow stage performers as a kind, respectful talent. She repeatedly refers to his cruel, indifferent womanising, but by the point I stopped listening he was an incredibly handsome film star in his twenties sleeping with other attractive actors who weren't looking for anything serious. Meade kept saying things like, this girl he was seeing must not have been happy about him moving on to the next woman. Really? Did she say so? Are you about to quote from a diary or letter in which she talks about how heartbroken she was? Give me their side of the story! This is what trashy bios are usually for, especially one which declares at the beginning that it's going to focus heavily on the subject's personal life. But no. Meade makes a point of repeatedly telling us young Buster Keaton only dated free-spirited, independent young women looking for fun, and then projects a traditional spurned woman narrative on every one of them, as if it were impossible for sexy young women on a film lot to enjoy bed-hopping as much as men. Or as if this uneducated, cruel, egotistical, emotionally atrophied jerk that she's writing about somehow managed to make every beautiful starlet forget her other prospects and fall for him time and again.

I kept wondering, after each really baffling, overly strong declaration in this book, wait, how did we get here? I kept rewinding, thinking I had missed a particularly damning anecdote. Nope. I could deal with Buster Keaton being a terrible person, and by all other accounts he had some big flaws, but Meade took the same stories I was listening to and spit out the most dramatic conclusions she could imagine. She took an understated comic persona and saw a debilitating mental illness. She took a shy but gifted performer and saw a despotic idiot. She obviously went into her research for this book with an idea of blowing the lid wide open on the total monster every other biographer and film historian had failed to find. Trashy is one thing, but this book is just gross.

Would you ever listen to anything by Marion Meade again?

What didn’t you like about Douglas R. Pratt’s performance?

Not that a good narrator would have saved this text, but his performance is among the clunkiest I've heard in an audiobook. He also repeatedly mispronounces Comique, the name of the film company Buster started with, and Damfino, the correct pronunciation of which is the entire point of what amounted to an ingenious sound joke in the silent film The Boat.

Hacked to the bone

As a newbie Keaton fan I'm looking for accurate, factual, unbiased bios and sources of information about Keaton and his life.
This is none of those things. I seems to have been written with the intention of smearing the Keaton family and Buster's character. It's very subjective about the points of view of people mentioned in the narrative, without actually having any facts or quotes directly from that person to back up what has been written. It is very much surmise on the author's part.
I've read Buster's autobiography and other Keaton biographies. Obviously Buster's is his own edited narrative of his life and isn't going to go into any graphic description of grim details, where they exist. Other bios are much better than 'Cut to the chase' as they are more balanced. Meade even describes scenes in Keaton films incorrectly. Not a mistake someone who had seen those films would make and this makes you doubt the accuracy and validity of other things being stated.
It appears that Meade just didn't like Keaton, his family or any of his work. It makes you wonder why, and why Meade wrote the bio in the first place. Imagine Hedda Hopper writing a bio about Chaplin, who she hated, and you'd be close to what has been done with this book. If you are a Keaton fan, avoid it. It'll annoy.

I like books on Hollywood starts and this was one of the good ones.

Tells you everything you would want to know about the guy.

You won’t be disappointed.

If you are a Keaton fan this is for you. Such an interesting life. Well written and well read. Great insight into his driving forces.