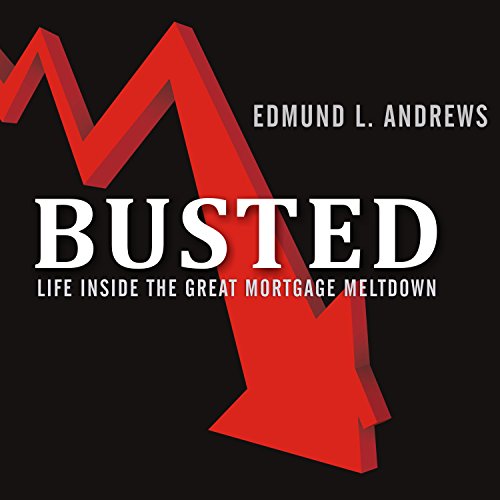 Veteran New York Times economics reporter Edmund L. Andrews was intimately aware of the dangers posed by easy mortgages from fast-buck lenders. But, eager to buy a home and start a new life, he gave in to temptation and began a surreal adventure into the mortgage mayhem that nearly wrecked our economy.

Busted weaves together the author's own ride to the edge of bankruptcy with the tragicomic stories of his lenders, the Wall Street pros behind them, and the policymakers in Washington who were oblivious until it was too late. The story takes Andrews to the offices of Alan Greenspan, the mansions of subprime-mortgage millionaires in Southern California, a despondent deal makers' convention in Las Vegas, and Wall Street.

Rich with on-the-ground reporting, Busted is a darkly humorous exploration of the cynicism and self-destructive judgment that led to America's biggest economic calamity in generations.

"This deeply personal expose is timely and sobering in its candor." (Publishers Weekly)
"Andrews's autopsy on his mortgage and the conditions that helped produce it is sharp and at times mordantly funny." (The New York Times Book Review)
"Read Busted for the insight....The president and every member of Congress should read this book." (The Washington Post)

The best book on the mortgage crisis I've read.

This was an engaging and insightful look at the mortgage crisis. Mr. Andrews's has a unique perspective, both from Wall Street as a financial reporter and from Main Street as a foreclosed homeowner. He tells an interesting story, without being over-the-top. And, importantly, he brings some hard-earned wisdom and perspective to the situation.
I am a professional investor and am very familiar with the banking and financial side of the crisis. Unlike many books, this one was very accurate (if necessarily simplistic) about the financial industry.

The book is well narrated; the reader is interesting without being overly dramatic.