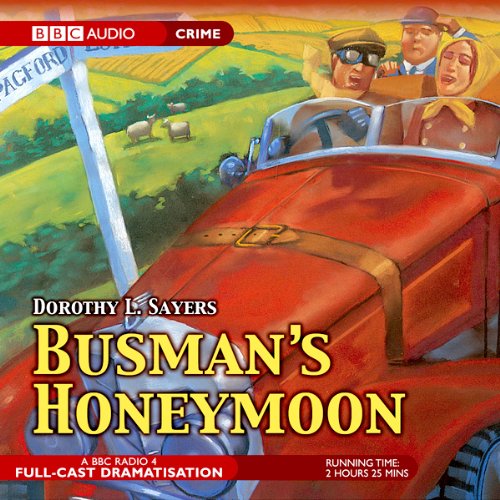 Lord Peter Wimsey has married at last, having finally succeeded in his ardent pursuit of the lovely mystery novelist Harriet Vane. The two depart for a tranquil honeymoon in a country farmhouse but find, instead of a well-prepared love nest, the place left in a shambles by the previous owner.

His sudden appearance, dead from a broken skull in the cellar, only prompts more questions. Why would anyone have wanted to kill old Mr Noakes? What dark secrets had he to hide? The honeymoon is over, as Lord Peter and Harriet Vane start their investigations.

Suspicion is rife and everyone seems to have something to hide, from the local constable to the housekeeper. Wimsey and his wife can think of plenty of theories, but it’s not until they discover a vital fact that the identity of the murderer becomes clear.

What listeners say about Busman's Honeymoon

Audiobook...started on this collection. And wasn't dissapointed.lobed the fact since I was new to the characters I felt I was introduced straight away. And haven't looked back.enjoyed it that much I listened to this and couldn't put it down.easy listening.aand I thought I was there. Enjoy this type of audiobook.really got into it.nothing to demanding.

Very good cast. Really good plot and easy to follow. The actors' voices were very easy on the ears. I would definitely buy another dramatisation.

Good dramatization, with a good cast. Have listened to this several times and have always enjoyed it.

I love this dramatisation of the Busman's Honeymoon, it so funny with lots of risky puns & laughter. A fantastic cast who brim over with enthusiasm to bring us comedy at its best. Ian Carmichael is perfect.

Carmichael is superb and so is Harriet. story shortened, precise to its essentials, but very well done.

A shell of the book

Busman’s Holiday is my favourite Lord Peter Wimsey book. The book is long, winding, and deep. The characters show themselves as mature adults, while also dealing with amusing situations and ingenious murder.

This dramatisation curtails the book badly. Start and finish are disposed of to get a core 2 hours of frantic murder mystery with little of the adult character from Lord Peter and Harriet Vane.
Ian Carmichael is the epitome of Lord Peter Wimsey, as always, but the others have so little to do they do not come across well.

If you need the full set of Lord Peter Wimsey you will want this drama. But do go to the full length audiobook first, so you experience this Sawyers masterpiece in its full glory.

PS if you are really keen, do listen to the Lord Peter books in the correct order, the characters develop throughout. Whose Body is the first and introduces Lord Peter Wimsey. Busman’s Holiday is the last and in my opinion the best.

I thought I was getting the book but it turned out to be a performed play. Good as far as it went, but I would have preferred the whole story.