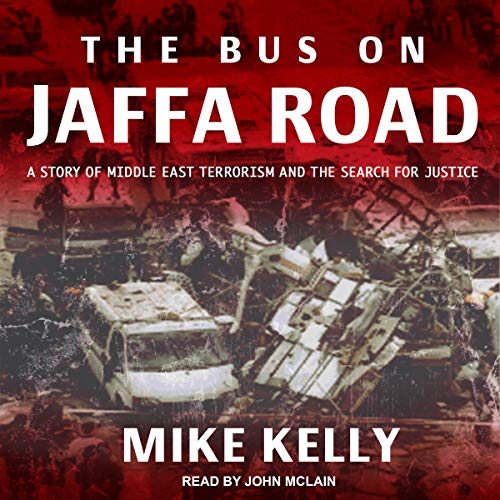 A Story of Middle East Terrorism and the Search for Justice
By: Mike Kelly
Narrated by: John McLain
Length: 12 hrs and 19 mins
Categories: History, Middle East
4.5 out of 5 stars 4.5 (2 ratings)

By: Mike Kelly
Narrated by: John McLain
Free with a 30-day trial

As the morning sunlight crept over the limestone walls of Jerusalem's old city, two young Americans flagged down a bus and got on. It was 6:45 a.m., February 25, 1996 - an otherwise ordinary Sunday in Israel. Sara Duker and Matthew Eisenfeld settled into their seats as the door closed on Jerusalem's Number 18 bus which would take them across the spine of this ancient city of hills.

On this day, they had risen earlier than normal in the hope of touring an archaeological site. After a few more stops, their bus turned on Jerusalem's Jaffa Road and rolled up a slight hill and stopped again. A young man, who seemed to be a student and was carrying a black duffle bag, got on. No one paid much attention to him, witnesses said later. Students carrying duffle bags or backpacks are a common sight in Jerusalem.

But this man was no student. He took a seat. After several more stops, he stood and pushed a button attached to his duffle bag - and set off a huge bomb. Sara and Matthew died in the explosion. So did 24 others, along with the bomber. Their grieving families of the Americans set out to get answers and justice.

So begins the story of The Bus on Jaffa Road. The narrative weaves from the streets of Jerusalem to a West Bank refugee camp to the White House, Congress, and a US courtroom where the victims' families filed a lawsuit against Iran for financing the bombing - then to a prison in the Negev desert in Israel where the author confronts the man who build the bomb on the Jaffa Road bus. It is a story that prefigures many of the difficulties of America's "war on terrorism" and reminds us of the intractable nature of the Israeli-Palestinian conflict that continues to this day.

What listeners say about Bus on Jaffa Road