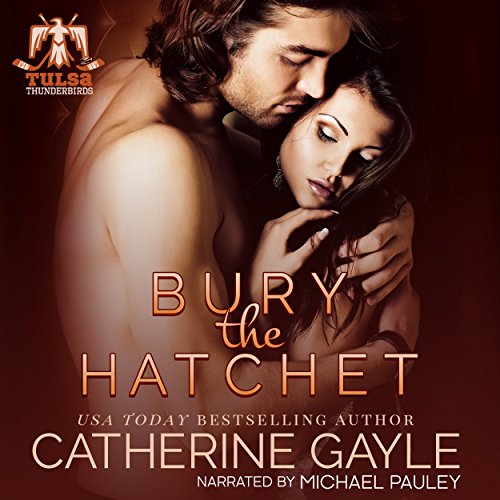 By: Catherine Gayle
Narrated by: Michael Pauley
Try for $0.00

He was poised to be an elite goalie for a contending team.

Hunter Fielding has long since proven himself to be one of the best goaltenders in the NHL. The problem? His former team had another (slightly better) backstop. They left Hunter out to dry, the upstart Tulsa Thunderbirds claimed him in the expansion draft, and he made a few stupid comments about backasswards Oklahomans. Now the T-Birds say the only way he can redeem himself is to make nice for the media with some local goody two shoes who's made some mistakes of her own.

Tallulah Belle Roth was the reigning Miss Oklahoma USA until a night of out-of-control drinking, a naked foray in a hot tub with very bad boy, and a bunch of lowlights on TMZ. Now she's been stripped of her crown and is facing the censure of the same people who made her out to be Little Miss Perfect. Tallie won't ever get her title back, but her life is another matter - and the only way the public will allow her to do that is if she presents herself as happily settled with someone else under Oklahoma's eye.

The marriage is to be in name only - one year of sickeningly-sweet lovey-dovey PDA, all to get their detractors to bury the hatchet. Those kisses and tender moments for the cameras take an emotional toll, though. Can in name only be enough?

What listeners say about Bury the Hatchet

I actually really liked this book. I loved the way Tallie and Hunter were forced together and made the best of the situation. I like that they didn't beat around the bush with their feelings. The story had just enough drama but not overly done to annoyance. I would definitely listen to the next book in the series.

The narrator was good and still had some improvements to work on. for most of the hockey guys he had them sounding like they were super hyped up. and when there should have been a period pause his voice tones made it sound like there was more so his inflections weren't always good. Sometimes Tally sounded like she was from Boston instead of the south, same or Huntery, boston instead of from Canada. But i'd totally give him another chance, i've heard much much worse.

A GOOD START TO THE THUNDERBIRDS TEAM

Through no fault of his own Hunter found himself being transferred and his uncensored comments on what he thought to that and to the people of Tulsa landed him in a whole heap of trouble. So when he got to Tulsa Thunderbirds offices there were plans put into place to save his reputation.... wedding plans. Beauty Queen Tallie has just been stripped of her crown because she was caught in a hot tub with a hot guy..... which landed her in hot water and now she's being forced to marry Hunter to claim her now tarnished reputation back.

Since she was a baby Tallie's been groomed all her life into the beauty pageant world, always being told what to do, when to do it and everything in her life has been taken out of her control. So it was nice to see her gain confidence, learn what she liked and didn't like and slowly claim her life back with the help of her new husband Hunter. They had to act like lovers in front of cameras and the intimate talks, soft caresses and hot kisses quickly amped up the chemistry and feelings between husband and wife. And soon it wasn't just for the cameras..... it was for two people that had slowly, but surely, fallen in love.

This was a sweet light romance but it did have its dramas and angst as her angry Mother and displaced furious Pageant Guru tried to get Tallie back..... by any means necessary. But it was the build-up to Hunter and Tallie's relationship that was so entertaining to listen to because they went from being total strangers forced into marriage - to become a loving partnership who enjoyed cosy nights in, sex, tender touches and steamy kisses. There was a secondary story about Hunter's brother who was sinking lower and lower into a downward spiralling world of drugs. Dual POV's, irritating music in between chapters and the narrator was just ok because his female voices weren't very convincing.

Worth a credit? Yes, it's not deep, intense or particularly suspenseful but it is entertaining and very enjoyable..... however, I'm a bit torn between giving it 3.5* or 4.

Review for Bury The Hatchet

I loved this book. That being said, I'm a sucker for sport romances. The narrator was very good. However, I felt that his voice choices were weakest on the male and female lead characters. He still did a good job though. I love that there was a mystery and a couple of secrets in the story. The lead characters were very likable. I highly recommend this audiobook.

loved the story, hate the music interruptions. the characters were great. can not wait for the next book.

I loved the narrator. of this book, his female characters were well performed and he had the accents of all characters correct, this book was so easy to listen to. The story didn't drag and the main characters were likable despite & because of their flaws, I look forward to learning about the rest of the team -especially if Mr.Parley narates.

I enjoyed the book. Like all those in her Portland storm series the couple dealt with real issues. The H/h had you rooting for them in the book. The narrator was okay. Seemed to struggle with the accents. But the music at the beginning and end of every chapter was distracting. It made it difficult to stay lost in the story. Unfortunately I won't be able to make myself listen to the rest of the series because I was that annoyed by the music.

Update - I re-listened to this book and again, I enjoyed the story and the narrator was fine, but the music was so distracting I came back to make sure I added a review about how bad the music is.

The story was great, but it was hard to get comfortable with 'Hunter'.
There was way too much profanity for my taste. Michael Pauley was an excellent storyteller, as always!

Catherine Gayle truly makes her books come to life. Once you read one of her books you can't wait to read the next. Having The Tulsa Thunderbirds spin off of the Portland Storm Series let's us explore new story lines while keeping current with previous characters.

I like to read Sport Romance with something extra and 'Bury the Hatchet' gave me that.

Its not a book that focuses on the only on the sport or the player lifestyle. The book mainly focuses on Tallie and Hunter as individuals and as a couple.

Tallie and Hunter were forced to get married as a publicity stunt, a move that should have improved their public image.

What started out as a temporary arrangement soon developed into something deeper.

There were many moments in the book that made it memorable.

I like the small intimate moments between the couple as they come to know one another.
Learning about Tallie's life as a beauty pageant competitor, the stress she was under, how tightly her life was held in other people's hands, the small way she found to rebel that eventually backfired and brought her to the arrangement with Hunter.

I loved learning about Hunter as a person. He made a stupid comment and paid for it.
It was surprisingly easy to like him (not a given, with all the asshole heroes featured in sport romance books).

It was heartbreaking listening to him talk about his brothers drug problem and the effect it had on his family.

Hunter wanting to give up on him, and Tallie being the one giving him a chance to redeem himself.

I loved seeing the connection form and grow between Tallie and Hunter. They were strangers who found each other without meaning to.

Tallie's talk with her father was a very emotional read as well. She learned the truth about herself and still found the strength to move on with the family she made.

The book is not only angsty but also steamy. Tallie discovering and exploring her sexuality was well done and helped develop the connection between her and Hunter and her growth as a character.

A great romance book with a well-deserved and satisfying HEA.