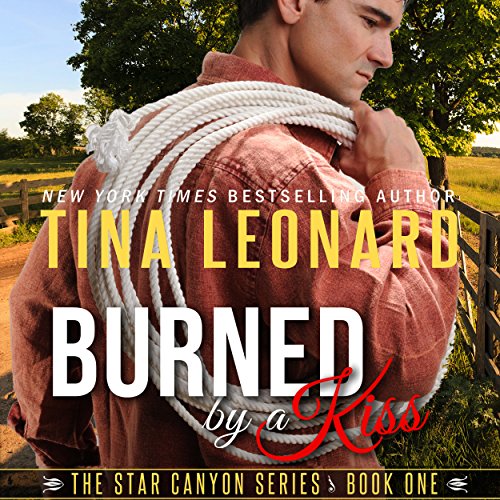 Burned by a Kiss

Burned by a Kiss

A young veterinarian and a difficult man have been circling each other for over a decade. Under the Southwestern sky, and with everything they hold dear in the balance, it's finally time for one of them to make a move.

Ever since graduation, when Santana Dark leaned over and kissed the brainy and shy Emma Glass, she has been smitten with the dark, brooding hunk. She thought about him while he served overseas, while she stayed home in Star Canyon, New Mexico, and tended to its animals. Now he is back, ready to retake his place with his three brothers and his spitfire of a sister at the family ranch. He'll have to be the man of his family now, as his father died in a mysterious fire that the police are still investigating.

Nick Marshall comes to town, a cousin to the Dark family though they've never met this wealthy stranger, and he claims to hold the legal title to the family ranch. Turns out Dad had more than a few gambling debts, including to the uncle his children didn't know that they had. With his world spiraling out, Santana finds solace and comfort in Emma's arms, and she finds heat and passion in his.

Santana and Emma finally have ignited the spark that has always existed between them. Now the trick will be to keep the flame from consuming them both.

What listeners say about Burned by a Kiss

I am so hooked on this new series

This was such a sweet heartbreaking listen of one soldier coming home to help take over the family ranch who fallen for the nerdy girl every since it was a dare to kiss her in school. Through his tough days and nights overseas seeing the worst part of war his thoughts were on her and that kiss. He thinks just maybe once he gets back into the swing of things he just might try that kiss again and see if it is as good as he remembers.

A veterinarian who has spent so many years dreaming about the boy who kissed her turning into a man fighting for his country coming home and all that he must have endured. She wonders how he has changed. Just how turned upside down his world is and what she can do to help him. It is tough having a crush on a man that never knew you were around but for one night when their lips touch which changed her life forever.

When Santana comes home his sister sets him up with a dog that needs to go see the vet for a checkup. Once he gets there he realizes his sister has set him up, deciding not to let any grass grow under his feet he would tease the little vet. One can’t be quite sure if he is teasing or being straight up. This is where things get interesting while Santana baits Emma sparks fly as the whole office hears what they say leaving you chuckling. Santana is one hot hunk of a soldier who has bad dreams and thinks he isn’t good enough for Emma with all that he has seen he has come back broken. This doesn’t stop him for baiting her every chance he can get. Santana are what dreams are made of every women in the world would like to have one like him.

Emma has heard that Santana has come home oh the dreams she has had but knows she isn’t even in his league. There is no way a man like him would want someone like her. She has had a tough morning and the first person she sees is Santana and his new dog. Lord Have Mercy doesn’t he look good, she has got this she can handle or Lord please help her. She plays it cool as he flirts she takes his words in another meaning two can play this game. Is it getting hot in here or is it just her being around this sweet talking hunk of a man.

Ms. Cauldwell brings so much so much to this audio from her sexy voice to her wonderful humors tones. Both her male and female voices were wonderful you have no trouble understanding who is talking or what emotion they are feeling. She adds humor with a chuckle you can hear the smile in her voice. I did not hear any high or low parts or any breaks in this audio. Her tones are right on mark as she gives you a delightful listen. Between the author’s story and the narrator I had trouble putting this down. I even took a little longer shopping to hear as much as I could. I found myself laughing and chucking throughout this story as the narrator gave me a vivid picture that was playing out before me. I have not listened to anything by this narrator and am hooked on her voice. I really am looking forward to listening to more audios by her. I have bought a few and will be picking up some more of her work very soon. She is a total delight to your ears with a lovely clear voice that you could listen to for hours.

I have read several books by Ms. Leonard some I have liked more than others but I always know that she is going to give me a book that is entertaining with a wonderful plot and most of the times a book I can’t put down. This is going to be a wonderful series that has me hooked already I can’t wait for the next book. The author gives you an outstanding story with humor, flirting that makes you smile, two people so drawn together neither has a clue the other would give anything to have them. I have laughed, hung my head as my heart felt so much pain for the Dark family. How can one family take more when they find that everything they believed in has been a lie right down to the father they adored and loved? This is a story that will pull you in with mystery, lose, love, humor, passion as these people get over broken hearts learning how to start over and love again. The author gives you a story inside a story I feel sure setting you up for the next family member who is going to have to face the facts. This was a very well written story with delightful characters and supporting characters. I just loved his brothers and sisters, even Nick after the first few pages he was in. You will find yourself rooting for more than one person as the author throws a few twists that leave you with your mouth hung open. WOW I sure didn’t see that coming. There is a little mystery as you find out things about Uncle Nick that will rock a few worlds. I was very disappointed to find this is the first of the series and the only book published at this time. Man I want the next book now, I sure hope it will not be long before the next book is out and I hope the audio is with this same narrator.

If you are looking for a wonderful entertaining read that will hold you interest and keep you invested not only in the story but the characters you do not want to miss Burned By A Kiss. You will not go wrong with this hot little read that keeps you smiling and chuckling as the author takes you on a whirl wind ride in this wild New Mexico land where they grow them hot, wild and flirty with a man that can change your world with one kiss that leaves you wanting more.
.
P.S at the time of this post this book is a goodreads giveaway

A family story not to be missed

I found this to be a great audio book. The narrator just pulled you into this contemporary romance. Emma the town veterinarian has carried a school girl crush for the high school jock for years. When Santana Dark returns from tours overseas Emma learns how much he has cared for her as well. Full of hot love scenes but not overly done to my estimation.

The story is definitely a to be continued. When the Dark family learns their whole lives have been a lie and their true backgrounds and their fathers deception is revealed it is certainly mind blowing.

I would recommend this book and I plan to follow what will develop as well.