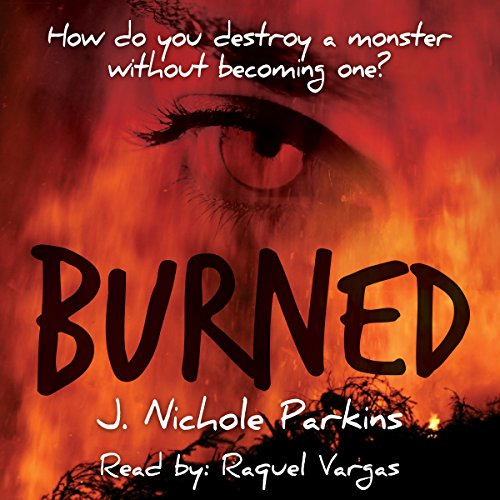 By: J. Nichole Parkins
Narrated by: Raquel Vargas
Try for $0.00

Kyra Richards is anything but ordinary.

She possesses a rare talent, and everyone wants a piece of her. Convinced to go undercover to investigate a string of horrific murders, she is drawn into the preternatural underbelly of Florida's Suncoast.

They want to use her. But no one can control her.

Caught in a web that gets harder to escape from every day, she is torn between two men and two lives. When her past catches up with her, she is forced to face her demons.

How do you destroy a monster without becoming one?

As the fight against her dark nature intensifies, she revels in the power unleashed within her. But will she risk the one thing worth fighting for?

What listeners say about Burned

Can I give more than 5 stars?

Absolutely amazing! And there's a book 2!

Kyra is a shifer but not just any shifter, she's an all black panther with the ability to set things on fire. That scares her a little and she has no control over it. Her background is a little shady and filled with terror but she's a strong woman. Kyra works for the FBI and she and partner Spencer are investigating a string of murders that involve some type of preternatural being that destroys the bodies to get to the bones.

Along with the investigation, she meets Daniel, a human and sparks start to fly. To complicate matters her ex boyfriend Gavin finds her after seven years of searching. This story is so well rounded; relationships, romance, suspense, mystery and an author who has a gift to build a vibrant and complex story that grabbed me immediately.

As a Floridian I love that it's set in Tampa Bay. I pictured the city and west coast as if I was there, This book is amazing on its own but the narrator is perfect. Great pacing and quality. She gives even more character to the story.