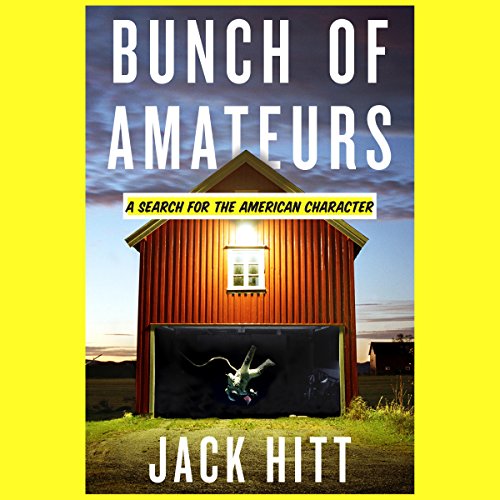 A Search for the American Character
By: Jack Hitt
Narrated by: Peter Colburn
Length: 10 hrs and 34 mins
Categories: History, American
3.5 out of 5 stars 3.7 (32 ratings)

What is it that drives the success of America and the identity of its people? Acclaimed writer and contributing editor to This America Life Jack Hitt thinks it’s because we’re all a bunch of amateurs.

America’s self-invented tinkerers are back at it in their metaphorical garages - fiddling with everything from solar-powered cars to space elevators. In Bunch of Amateurs, Jack Hitt visits a number of different garages and has written a fascinating book that looks at America’s current batch of amateurs and their pursuits. From a tattooed young woman in the Bay Area trying to splice a fish’s glow-in-the-dark gene into common yogurt (all done in her kitchen using salad spinners) to a space fanatic on the brink of developing the next generation of telescopes from his mobile home, Hitt not only tells the stories of people in the grip of a passion but argues that America’s history is bound up in a cycle of amateur surges.

Beginning with Ben Franklin’s kite and leading all the way to the current TV hit American Idol, Hitt argues that the nation’s love of self-invented obsessives has always driven the country to rediscover the true heart of the American dream. Amateur pursuits are typically lamented as a world that just passed until a Sergey Brin or Mark Zuckerberg steps out of his garage (or dorm room) with the rare but crucial success story. In Bunch of Amateurs, Hitt argues that America is now poised to pioneer at another frontier that will lead, one more time, to the newest version of the American dream.

“A love letter to American culture…as fascinating as it is inspiring, this hilarious book is a tour de force that celebrates troublemakers, risk takers, and the American spirit.” ( Publishers Weekly)
“I ask myself if there's a better non-fiction writer in America than Jack Hitt... and come up with nobody. I've been following and stealing from his work my whole career. His usual mode is to convince you that you're reading a rollicking yarn, while with his left hand building a serious and unexpectedly persuasive argument. In Bunch of Amateurs he brings that to perfection. The book is about cranks, but it is also about the strange crucible of social tensions and intellectual assumptions inside of which our ‘knowledge’ gets made.” (John Jeremiah Sullivan)
"How embarrassing it is to be asked to craft a blurb for Jack Hitt. I'm not fit to carry his bags. Few writers are. Bunch of Amateurs is completely sublime; beautifully written, hilarious, brushfire protean in the erudite shifts he makes - high culture, low, science, history, music, you name it - and just wonderfully rollicking. Who else can have one simultaneously laughing out loud and waiting with bated breath for Benjamin Franklin to alight from a carriage in Paris in 1778? No one but Jack Hitt, that's who. Like I said, it shames me to endorse him, so unfit to the task am I, but endorse him I must. I have no choice. You must read this book." (David Rakoff)

The stories of amateurs are great, but there aren't quite enough of them. Jack Hitt is exuberant and a little too much in love with his own voice, so he digresses a lot. A couple of his amateurs are professionals who got there by unusual routes. But that's part of the story as well.

this book was fun and interesting. it's initial NB premise is that amateurs lay behind many profound trends in our times.
I endorse it whole heartedly.

Worse book I have ever read

What would have made Bunch of Amateurs better?

Researched facts, avoided unsubstiated generalizations. From opening premse, manufactured a thesis and forced data into it. Can't comment on the conclusion as I was so fed up with the con job in the first several chapters I quit.

What could Jack Hitt have done to make this a more enjoyable book for you?

Went to a movie instead of writing this book...or better yet, offer me my money back.

Can I have my money back? I'd get more by buying a lottery ticket.