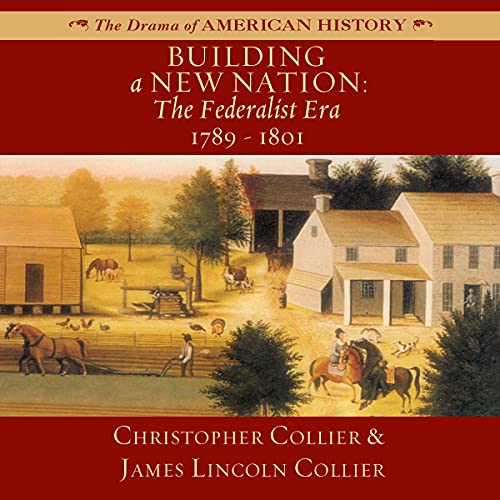 Building a New Nation chronicles the development of the new government following the signing of the Constitution. It explores the political views of the young nation’s leaders as they struggled to form a strong nation, despite the foreign and domestic dilemmas that they faced. The authors describe the beginnings of the two-party system, the administrations of the first three presidents, and key decisions by each branch of the government that shaped the future of the country.

What listeners say about Building a New Nation: The Federalist Era: 1789-1801

This has very good content regarding key issues in history as well as details of history. And it is for young people, but that doesn't mean critical facts that are unsavory should be avoided. The portion on George Washington at Mount Vernon that refers to his directions to "stewards" -- these were enslaved people, not paid stewards. Why try to camouflage such an important piece of history?
Another example is the description of the 1800 election and how the two new parties campaigned against each other. It refers to Federalists claims that included the charge that Jefferson had illegitimate children. The text then states that the claims were lies. It's surprising that any historians would still deny Jefferson had children with Sally Hemmings. Leave this charge out if it's not the right age to bring up this topic, but don't state that this claim was a lie. I found such examples a deep disappointment. The founding fathers were not perfect or American history for that matter -- children should know that.

One of the finest American history series of all time. Absolutely stunning... Content, presentation, etc. are all first class.

I love these series! america the beautiful! I appreciate our history and so grateful for all of the people that sacrificed and helped build our constitution.