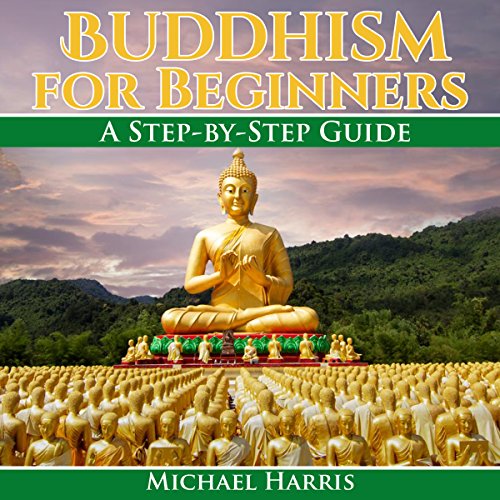 By: Michael Harris
Narrated by: Matt Haynes
Try for $0.00

Buddhism is a religion and dharma that encompasses a variety of traditions, beliefs, and spiritual practices largely based on teachings attributed to the Buddha. Buddhism originated in Ancient India sometime between the 6th and 4th centuries BCE, from where it spread through much of Asia, whereafter it declined in India during the Middle Ages. Two major extant branches of Buddhism are generally recognized by scholars: Theravada ("The School of the Elders") and Mahayana ("The Great Vehicle"). Buddhism is the world's fourth-largest religion, with over 520 million followers or over 7% of the global population, known as Buddhists.

Buddhist schools vary on the exact nature of the path to liberation, the importance and canonicity of various teachings and scriptures, and especially their respective practices. Practices of Buddhism include taking refuge in the Buddha, the Dharma, and the Sangha, study of scriptures, observance of moral precepts, renunciation of craving and attachment, the practice of meditation (including calm and insight), the cultivation of wisdom, loving-kindness and compassion, the Mahayana practice of bodhicitta and the Vajrayana practices of generation stage and completion stage.

In Theravada the ultimate goal is the cessation of the kleshas and the attainment of the sublime state of Nirvana, achieved by practicing the Noble Eightfold Path (also known as the Middle Way), thus escaping what is seen as a cycle of suffering and rebirth. Theravada has a widespread following in Sri Lanka and Southeast Asia.

Mahayana, which includes the traditions of Pure Land, Zen, Nichiren Buddhism, Shingon and Tiantai (Tendai), is found throughout East Asia. Rather than Nirvana, Mahayana instead aspires to Buddhahood via the bodhisattva path, a state wherein one remains in the cycle of rebirth to help other beings reach awakening.

What listeners say about Buddhism for Beginners

This short little audio had a lot of good information on the fundamentals and history. It wasn't quite what I was expecting from a Step-by-Step guide. I don't think it would tell a beginner how to begin. But, it does give tons of really good information to inform what it is all about and the different variations of Buddhism, and could point a beginner in the right direction. I enjoyed listening to it and found it way more interesting than others on the same subject. Matt Haynes was easy to listen to and it felt engaging.

In depth introduction into Buddhism and Buddhist beliefs. Very comprehensive and a quick listen. Recommend for anyone curious about the religion.

I have a better understanding of Buddhism.

Though I have been interested in learning more about the teachings of Buddhism this is my first book on the subject. I requested this book in exchange for my honest review. I feel like I got good information for a beginner. It did leave me wanting to know more about this fascinating religion though. I highly recommend this book to anyone curious about the beliefs of a Buddhist.

Had good information on how and why Buddhism started and how to start practicing yourself.

A solid base to work from

For what it is Buddhism for Beginners is a wonderful book. You wont find any life altering nuggets of wisdom within its pages, but if you are interested in Buddhism and need a place to start I cant think of a better place to look. Matt Haynes voice is pleasant and easily understood through the whole book. Not sure what else to say aside from if you want to learn about Buddhism there are way worse places you could look.

I received this audiobook in exchange for a honest and fair review.

I really enjoyed this quick introduction to Buddhism. I came into this not knowing much about the Buddhism and I feel like I learned a lot in the 30 minutes it took to listen to this audio. I have a better understanding of Buddhism now and I am interested in exploring more. Great narration. Highly recommend for anyone who is curious about this religion or would like to learn more.

I was given this free review copy audiobook at my request and have voluntarily left this review. The fact that I was gifted this book had no influence over my opinion of it

This was a very interesting book - easy to understand. I would recommend this book.I received this audiobook for free in return for providing my honest and unbiased review.

Short, to the point, and packed with information

Buddhism for Beginners is short and to the point. At 38 minutes long you're not going to get the whole story, but if you're not sure where to begin or don't want a huge time investment this is a good place to start.

This audiobook is a quick overview of what Buddhism is, what it means to be a Buddhist, and what some of their beliefs are. It goes into what the goals of Buddhism are and introduces you to some terms and concepts. It also tries to dispel some common misconceptions and goes a little into what New Age is and how it's related to Buddhism.

This isn't my first foray into Buddhism and I still learned some things. One interesting piece of information that resonates with me is that cultivating knowledge and wisdom are part of the Buddhism tradition. It's easy to picture Buddhist monks sitting in a temple somewhere meditating, oblivious to the outside world but that's not a clear representation of what Buddhism is all about.

The only issue I had with the audiobook was when it mentioned "Kōans" a couple times in the beginning without ever explaining what the Kōans actually are.

Overall the narration was good. There were a couple brief instances where the volume of the audio dropped slightly, almost as if the narrator had moved a little farther from the microphone. Not a huge deal, but I did find it slightly distracting.

I received this audiobook for free in return for providing my honest and unbiased review.

Really enjoyed this quick but simple introduction to Buddhism. I was able to learn a lot of interesting information and it was explained in a simple and concise matter.

I was given this Audiobook for free in exchange for my honest review.

I think this was a very informative listen about Buddhism. There are a few good reasons to listen to this audiobook. 1) I feel there are those who already practice Buddhism that have interest, 2) There are also those who know someone that is Buddhist and they may not understand them and want to learn more, and 3) Perhaps there are those who are already living this life who don't even know it yet. There are many people practicing mindfulness as well as other aspects of Buddhism today and I think there's a crossover. Everyone has their own set of beliefs.

I truly enjoyed this book written by Michael Harris.

Matt Haynes was the perfect reader. He had great voice inflections and tone and made this more enjoyable. I'll listen to this one again.