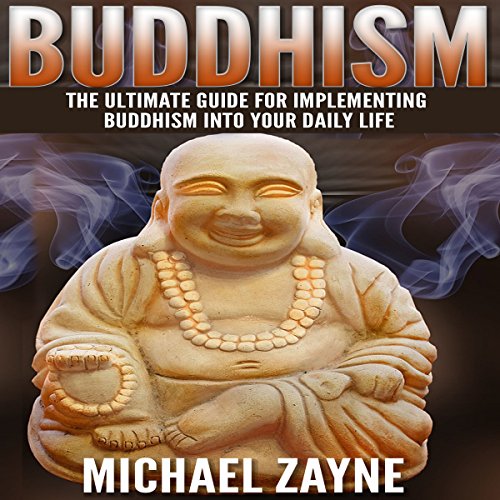 The Ultimate Guide for Implementing Buddhism into Your Daily Life
By: Michael Zayne
Narrated by: Matyas J.
Length: 1 hr and 40 mins
Categories: Religion & Spirituality, Buddhism
5 out of 5 stars 5.0 (2 ratings)

It is important to know that Buddha was not a god, and he never claimed to be one. He only taught the path to enlightenment from his own experiences. Buddhists at times pay respect to images of the Buddha but not to ask for favors or during worship. A statue of the Buddha with hands gently on its lap and a smile reminds each one of us to aim at developing peace and love within ourselves. Bowing to the statue of the Buddha is a way of expressing gratitude for his teaching.

Buddhists are seen as poor because it teaches that wealth is not a guarantee for a happy life, and that wealth is not permanent. Everybody suffers, whether from a poor or rich country. However, for those who understand Buddhist teachings, they can realize true happiness. Buddhism varies because the emphasis depends on a country due to culture and customs. However, what is constant is the essence of the teaching; the truth or the Dharma.

Furthermore, Buddhism is a philosophy that has tolerance towards other beliefs or religions. It agrees with the moral teachings of other religions but it goes further and provides a long-term purpose within our existence by use of wisdom and understanding. The core of Buddhism also fits into science because its four noble truths can be tested and proven by anybody. As a matter of fact, the Buddha himself urged his followers to test his teachings instead of accepting them as true. This philosophy of life relies more on understanding as compared to faith.