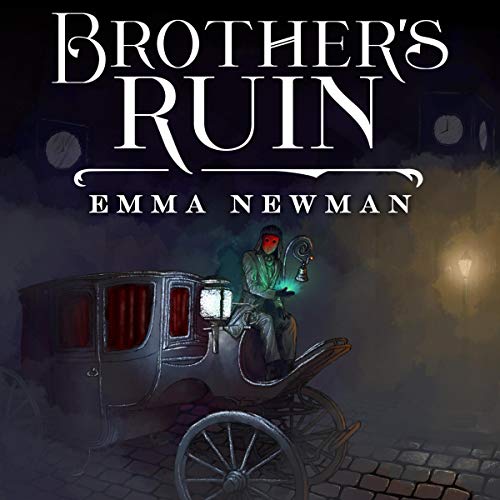 The year is 1850 and Great Britain is flourishing, thanks to the Royal Society of the Esoteric Arts. When a new mage is discovered, Royal Society elites descend like buzzards to snatch up a new apprentice. Talented mages are bought from their families at a tremendous price, while weak mages are snapped up for a pittance. For a lower middle class family like the Gunns, the loss of a son can be disastrous, so when seemingly magical incidents begin cropping up at home, they fear for their Ben's life and their own livelihoods.

But Benjamin Gunn isn't a talented mage. His sister Charlotte is, and to prevent her brother from being imprisoned for false reporting she combines her powers with his to make him seem a better prospect.

When she discovers a nefarious plot by the sinister Doctor Ledbetter, Charlotte must use all her cunning and guile to protect her family, her secret and her city.

Brother's Ruin is the first in a new gaslamp fantasy series by Emma Newman.

At the Publisher's request, this title is being sold without Digital Rights Management Software (DRM) applied.

What listeners say about Brother's Ruin

This is the second Emma Newman series I've listened to and I love it. can't wait for the next one.

Stories ok, but the narration

The narration has obviously improved since the Between two thorns series, but it's still hard to tolerate. Less over-pronounced than before, but still emotion is expressed with shrill high pitched voices. It ruins it for us and means you find the characters really whiney. There are several conversations that go on too long and do not develop at all. The woman in her stories always seem to need a man, and this one has way to much fawning over a particular man. The story was engaging, but dragged out. We will try the next and hope it develops. It's a bit of a love hate relationship with these audio books for us.