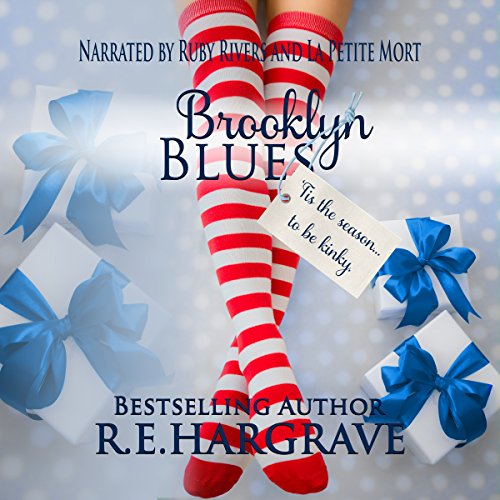 By day, Brooklyn Crenshaw goes to work and does her job. She's a working girl who follows orders and stays off the radar. Oh, and she might have a crush on William K. Baxter from across the hall. Each time she passes his office - with his polished name plate on the window - her gut clenches with desire at the sight of him. But he never looks up, can't possibly know who she is, and even if he did, her needs would send him running.

Because they always ran.

At night, in private, she turns on her laptop so that her Sir can turn her on. Brooklyn's never seen his face, but she knows his voice and the magic of his words. The arrangement works for her.

As the office holiday party approaches, Brooklyn starts receiving Secret Santa gifts which suggest more than casual interest, Sir reveals his fondness for exhibition and voyeurism, and William K. Baxter finally looks up at her and waves.

Brooklyn begins to question everything. Does she continue to follow the orders of a man who hides behind technology but is always there, or does she take a chance on the man right in front of her who's seen her at long last? Then there is the Secret Santa who seems to know what makes Brooklyn tick. So many decisions.

'Tis the season...to be kinky.

What listeners say about Brooklyn Blues

This was a fun, slightly sexy, festive read. I had expected it to be a little steamier but it ended up being just the right amount of steam for the length of the book.

The narration was amazing!!! Ruby Rivers, and La Petite Mort did a fantastic job on this book!

I really enjoyed the eroticism of this book. although kind of predictable. I always enjoy the narration of these two! they are steamy on their own, combustible together.

good story. I just love to listen to these two narrators, they bring the story to life. Brooklyn's met her Dom online, is she ready to give up her anonymous sex for the real thing.

Brooklyn Blues was great. It brings a little bit of online searching, interacting, wishing, some intrigue and some things of suspense.
The whole book stems from a quick search at work for the current top-selling genres in books..

Brooklyn Blues by R. E. Hargrave a novella that is a snappy listen with a adorable seductive cover. A merry & sexy holiday themed office romance tale with a bit of bdms thrown in this naughty tale. An online flirting relationship, a secret santa, stalker co-worker, an office fantasy & star in Brooklyn's dreams, all blended together in a joyous listen.

What did you love best about Brooklyn Blues?

When Sir showed himself to Brooklyn at the party.

How Brooklyn really figured out what she wanted in her life.

Have you listened to any of Ruby Rivers and La Petite Mort ’s other performances before? How does this one compare?

I love listening to them together. They made the story come to life.

A Kinky Christmas. I've reviewed this for United Indie Book Blog. I had the audio version of this book. This a quick, hot, and sexy story. Another awesome read from RE Hargrave. The story had just the right balance of intrigue, spice, and drama. I enjoyed it a lot! This is about Brooklyn's journey of discovery. Brooklyn meets Sir on a website and they hit it off. even after 6 month's they still haven't met face to face. This author sure has a way of bringing on the best stories in kink I've read. Keep up the awesome work. I can't wait to read or listen to your next book. I highly recommend reading R.E. Hargrave books.

I loved every second of it!

Great author, great narrators!
What else can you ask for?
This audiobook is entertaining, fun and SEXY.

I absolutely adored this short and steamy story! It's the perfect short story for anyone who is looking for something fun and hot! Narration was perfect and I loved listening to this book!

Tequila for the Ears

What made the experience of listening to Brooklyn Blues the most enjoyable?

Amazing story. So hot. I have always loved dancing to "Tequila Makes Her Clothes Fall Off" (my hubby likes it too). Well, the voice of La Petite Mort makes her clothes fall off. Hear me? ;)

What other book might you compare Brooklyn Blues to and why?

I am still dabbling in the world of submission and domination. I need to explore more.

Baxter's complete control of Brooklyn messes with the mind in the most delicious ways!

When Brooklyn finally learns the identity of her Sir!

I give up! I don't know why I bother trying to hold myself together when listening to La Petite Mort. That voice keeps you begging for more.

It is a short to the point kinky story that is interesting. Hot and steamy as you watch Brook learns her way around BSM hiding behind a screen. Things get a little tricky when things happen at work that keeps her guessing about who her master is. It is a fun story that has a good plot.

Ms, Rivers I thought did a good job but felt her voice tones were too much at times and to perky for the character. I felt Mr. Mort did a wonderful job, his voice fit the character, deep and masterful. Together they made the story work, there were no volume changes, no repeating of words, when one narrator took over it was smooth and easy. I felt like I was right there with them watching them play it out. I would enjoy listening to either of these narrators again.

This was a fast paced interesting story about a girl exploring her kinky side with a remote Dom... or so she thought!! The story builds up at the end with an unusual twist!!
Great characters - fun book.
I felt the narration was a bit over the top.

This is a great novella, cute, sweet and kinky! The storylines and characters are interesting and well developed. The lead character, Brooklyn Crenshaw, hides behind her keyboard into the world of Kink & D/s. She meets her Dom online and they maintain a virtual relationship for 6 months. As the story continues it gets more and more interesting. Gifts mysteriously start to appear at work for her, they are from her Dom whom she has yet met in person.This makes you wonder who he may be. R.E. Hargrove fits a lot of story in this novella, she includes some humor, drama, mystery and of course kink. There is an interesting twist thrown in too.

I listened to the Audible edition, the narrators, Ruby Rivers and La Petite Mort, are awesome and do a wonderful job telling the story and performing the voices. They brought the characters to life from the pages to your ears. Thank you for the great listen!

Brooklyn is learning herself and her true sexual desires. Little does she know that the man she is secretly crushing on is also the man she is talking to on the phone. This book is really well written and the characters are well developed. Narrated by Ruby Rivers and La Patite Mort did an excellent job bringing this story to life for me. I recommend that and one who likes a little spice in their story and are short on time this is the book for you!

I think I’ve found my new favourite author. R.E definitely knows what I like. Hot sexy books with hot sexy narrators!!! This will tick all the boxes for you! Great read/listen. Well done guys, keep up the great work.

Both narrators did a good job. I liked both of their voices and the way they impersonated the different male and female characters. A bit of a static background sound I could have lived without but all in all a very enjoyable performance. Both narrators gave life to the characters and made the story even better.

Loved this fun and steamy listen. Great characters and some unexpected twists made this an interesting listen. Loved the narrators, they play well off of each other and are fun to listen to. I received a free review copy of this audiobook at my request and I have voluntarily left this review.


This was a quick hot and dirty little story about Brooklyn who accidentally discovers a whole new world of BDSM and D/S and realizes its everything she never knew she needed. After meeting an anonymous online Dom she loves the life but is hesitant to bring it into her real life.
I confess that I originally picked this up just because I loved the cover, but I found this a fun listen with just the right amount of dirty and really enjoyed the fun of all the surprise gifts Brooklyn got from her secret admirer. There were several fun twists and turns at the end and it all wrapped up nicely. The narrators were both perfectly cast for both characters and delivered a great performance. Can't wait for my next by this trio.