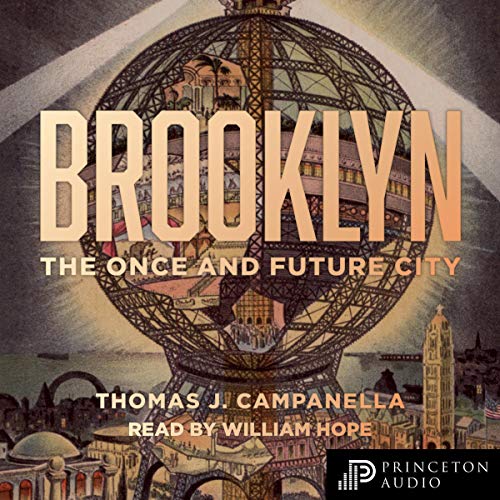 By: Thomas Campanella
Narrated by: William Hope
Try for $0.00

An unprecedented history of Brooklyn, told through its places, buildings, and the people who made them, from the early 17th century to today

America's most storied urban underdog, Brooklyn has become an internationally recognized brand in recent decades - celebrated and scorned as one of the hippest destinations in the world. In Brooklyn: The Once and Future City, Thomas J. Campanella unearths long-lost threads of the urban past, telling the rich history of the rise, fall, and reinvention of one of the world’s most resurgent cities.

Spanning centuries and neighborhoods, Brooklyn-born Campanella recounts the creation of places familiar and long forgotten, both built and never realized, bringing to life the individuals whose dreams, visions, rackets, and schemes forged the city we know today. He takes us through Brooklyn’s history as homeland of the Leni Lenape and its transformation by Dutch colonists into a dense slaveholding region. We learn about English émigré Deborah Moody, whose town of Gravesend was the first founded by a woman in America. We see how wanderlusting Yale dropout Frederick Law Olmsted used Prospect Park to anchor an open space system that was to reach back to Manhattan. And we witness Brooklyn’s emergence as a playland of racetracks and amusement parks celebrated around the world.

Campanella also describes Brooklyn’s outsized failures, from Samuel Friede’s bid to erect the world’s tallest building to the long struggle to make Jamaica Bay the world’s largest deepwater seaport, and the star-crossed urban renewal, public housing, and highway projects that battered the borough in the postwar era. Campanella reveals how this immigrant Promised Land drew millions, fell victim to its own social anxieties, and yet proved resilient enough to reawaken as a multicultural powerhouse and global symbol of urban vitality.

"A lively biography of New York's second borough.... Teeming with information, this is a must-read for fans of urban history." (Kirkus Reviews)

What listeners say about Brooklyn