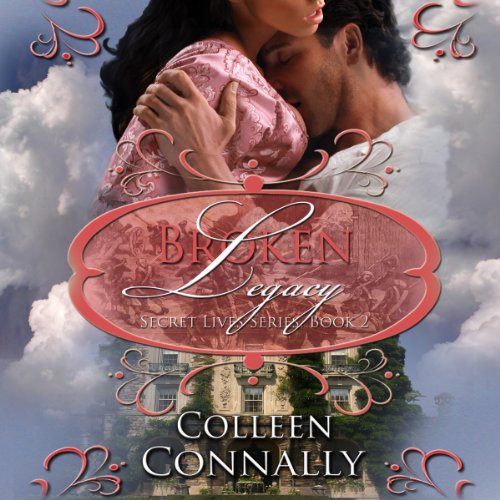 By: Colleen Connally
Narrated by: Allison Cope
Try for $0.00

Lord Gerard Lenister needed the lady…after their meeting, he wanted her.

For 17 years Lady Eloise Granville lived in France thinking herself a bastard. Not until her life was threatened did her father cross the English Channel to reclaim her as his legitimate daughter. Now four years later a revolution roars its ugly head in France. Rumors abound of Lady Eloise's life before her emergence in England…rumors that link her to the notorious leaders of the French Revolution.

Lord Gerard Lenister knows well the whispered connections Lady Eloise has across the Channel and the disdain that Society holds for the lady. It matters little to him. He could have cared less if she was the incarnation of a she-devil. He would marry Jezebel herself if she helped him on his mission. He is that desperate…but soon he discovers that Lady Eloise is not what she seems.

What listeners say about Broken Legacy

well if I could I would give the narration or performance no stars. the story is of course a great story but the narrator was terrible. She mumbled miss pronounce words spoke words in the middle of the sentence like they were the end and then added the additional words on like an afterthought. I finally gave up and just read the rest of it myself. I don't know how she could make a living as a narrator Mansoor really?

Would you try another book from Colleen Connally and/or Allison Cope?

What was most disappointing about Colleen Connally’s story?

Everything. One of the worst stories I have ever heard or read!!

Allison Cope sounds like she is on drugs!! Horrible narration. Hard to understand her dialect. Accent is to heave to understand at times.

What character would you cut from Broken Legacy?

ALL OF THEM LOL!!

ONE OF THE WORST STORIES I HAVE EVER READ OR HEARD ON AUDIO!!

OMG I am glad I got Broken Legacy when it was free on Amazon. I didn't like the writing style of the author. The main Characters Lady Eloise Grandville and Lord Gerard Earl of Lennister just were not interesting. The romance fell short the sex was blah and bland. Eloise has married Lord Gerard after meeting him at a ball given for her sister Susanna and her betroth Baron Waverly. Her brother The 6th Duke of Rothware's marries her off to Gerard a few days after they meet at the ball. Gerard needs Eloise's help locating his children who have been imprisoned in France. This is the period of The Terror in the French Revolution. Which is a very interesting period in French History. You wouldn't know that by the way its written in this story. Just the basics that most people know. Eloise helps smuggle people out of France into England. Eloise lived in France for 17years where she had a lover Luc. It makes you wonder how early this girl started her sexual affair with Luc, she could not have been more then 15. Eloise has deep secrets. Eloise is into more then smuggling people and Gerard is doing more then looking for his 9 and 7 yrs. old children being held in a French prison.

I think it is the writing style of the author that I found off putting. I got up to 72% read and just gave up. This might be one of the worse stories I have read in a long time. I CANNOT RECOMMEND Broken Legacy. Poorly done!!