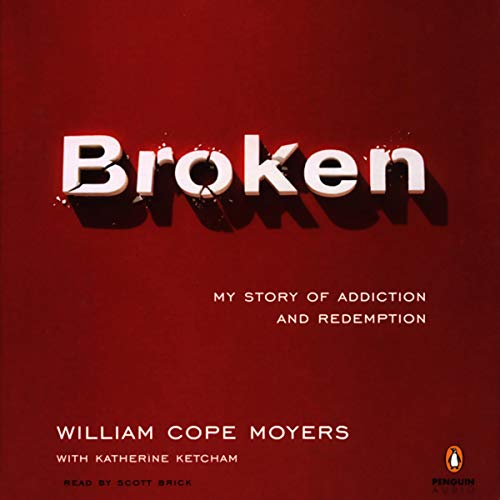 In October 1994, William Cope Moyers was flat on his back on the floor of an Atlanta crack house. His father, veteran journalist Bill Moyers, had put together a search party while his desperate family waited at home, where he had abandoned them three days earlier. Many times before, his life had unraveled from the effects of marijuana, cocaine, and alcohol binges, but it was his crack addiction and relapse, he remembers, that caused his father to look into the eyes of his firstborn son and utter the words "I hate you."

Today, William Cope Moyers has been sober for 12 years. He is the vice president of external affairs at the Hazelden Foundation in Minnesota, a nonprofit organization dedicated to helping people recover from alcoholism and other drug addiction. He uses his own experiences to carry the message about addiction and recovery into the public arena, and he reaches out to addicted people and their families who need help.

In Broken, Moyers tells the story of a love affair with alcohol and crack cocaine that led him to the brink of death over and over again. A harrowing account, it paints a picture of a young man with every advantage who found himself spiraling into a dark abyss. Battling shame and self-doubt at every turn, the author finally emerges into the clear light of recovery as he dedicates his life to changing the politics of addiction. He urges others like himself to speak out and battle against the stigma that keeps many addicts from seeking recovery. Moyers' story is a missive of hope for millions of Americans struggling with addiction, and an honest and inspiring account that is both wrenching and ultimately redemptive.

"William Cope Moyers's lucid, measured tale of his own plunge into crack-addled hell [is] frightening in its very realism." (USA Today)

"A memoir of a terrible disease and one man's spiritual journey through it ... that should be read by those who have friends or family members caught in addiction." (The Indianapolis Star)

What listeners say about Broken

This book was just too repetitive for me, along with the fact that the author thinks he is so much better than anyone under his level of lifestyle. The narrator had the same condescending sound/manner, which made for it horrible to try and listen. IMO it was a waste of my money and time. If he had told the story in a less snobbish way and had a different narrator, I probably would have enjoyed listening.

Average story with a lot of introspection

Would you try another book from William Cope Moyers and Katherine Ketcham and/or Scott Brick?

I bought this book because I enjoy hearing the addict's story - the people he met, the crazy situations he found himself in, the mistakes he made, etc... There is a story in this book, but there is also a lot (at least 60% of the book) of introspection and addiction theory. If one is a recovering/current addict, this is a good book to listen to - a lot of AA/addiction theory.

As I mentioned above, I enjoyed listening to the author's life story.

If you are looking for a good addiction story, Tweak by Nic Sheff is probably a better choice. If you buy this book, be prepared for the fact that the author has a message to get across - understanding why people (particularly the author himself) become addicted to drugs and alcohol.

Would you listen to Broken again? Why?

I wouldn't. But that's just me. This is an exceptional book, however, there seems to be many more that I haven't read. Its a "time and Newness thing" for me.

What other book might you compare Broken to and why?

Crash and Burn. The story of how it was, what happened and what its like now from high profile (actors, in the news celebrities) Which I have found out the only difference between them and me is money. Take away the money and we addicts are all the same on the inside, where we are sick.

Most recovery stories don't share how the promises don't always happen quickly, or how long the journey really is, nor discuss the shame surrounding our disease. Deeply thought provoking. Thank you Willuam.

I can think of no more important work for our society. Whether it’s addiction or any other form of mental illness, stigma, abuse, etc., the only way to light is by exposing the darkness

Hope for the addict

I came across this book trying to understand the mind of the addict because my loved is an addict. This book really help me to understand the addict and to surrender and let the addict found the strength with hands off. Really an excellent for any addicted person but mainly dealing with crack cocaine with self or family member and a great book for effective war on drugs in America

THE worst, the absolute worst book about addiction and recovery that I've ever experienced.

Cope's recounting of his life tells the story of a spoiled child who grew to be a spoiled brat. This entitled, self promoting, arrogant man drones on and onnnnnnnnnnnnn about how famous his dad is (poor baby!), how he always has money, how he constantly extends his stays in expensive rehabs, his nice clothes, his WONDERFUL life.

NOBODY around him is as wealthy, notorious, attractive, or as intelligent as he.

And then, when it gets almost so nauseating that it's intolerable....he shares that God spoke directly TO HIM.

If you want to feel inadequate, unimportant, poor, and betrayed by the Almighty Sky Dad, who speaks directly into the ear of an ass like this person, this is your book.

IF you are a recovering addict or alcoholic, I DO NOT RECOMMEND. This book will hurt you.

This was assigned to me to read for my addictions class, so beginning it was hard, but I'm so glad I finished it. I see, feel, and understand so much more; definitely worth the read/listen.

As a person in recovery i found this powerful, infuriating, frustrating, sad, inspiring, and very relatable to my own experience and struggles.

The story started out well - then just dragggggged on. ok to listen to if you have patience