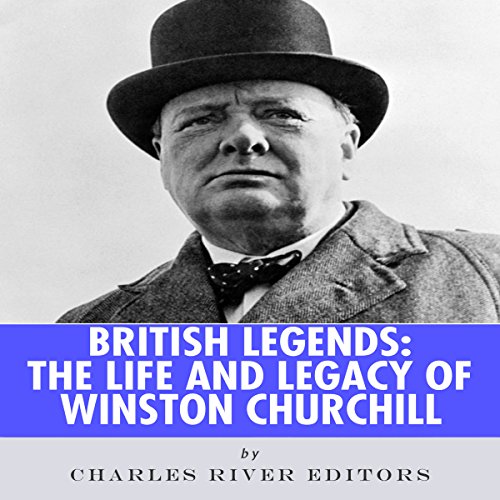 British Legends: The Life and Legacy of Winston Churchill

British Legends: The Life and Legacy of Winston Churchill

"Winston Churchill led the life that many men would love to live. He survived 50 gunfights and drank 20,000 bottles of champagne...and, of course, by resisting Hitler he saved Europe and perhaps the world." (Mark Riebling in Churchill's Finest Hour)

Was he "the greatest human being ever to occupy 10 Downing Street"? Or a man whose "brilliant but unsound judgement resulted in detrimental consequences for Britain and for the world"? Nearly 50 years after his death, debate still rages over Sir Winston Churchill's contribution to history. Indeed, now that wartime nostalgia has mostly washed away, in Britain in particular the views on Churchill are more divergent than ever.

On one point, though, the biographers and historians remain unanimous: Churchill led an astonishing life as a soldier, world statesman, historian, and Noble Prize Laureate. When he died at 90 in 1965, one of the most important figures in modern history had left the stage. From providing some of the 20th century's greatest soundbytes to successfully navigating Great Britain to victory in World War II against great odds, Churchill was at the forefront of global events for decades, becoming one of the most influential Britons in history. In 2002 he was named the Greatest Briton of All Time, and 40 years earlier he was the first person to be made an honorary citizen of the United States.

Churchill will forever be most associated with World War II, but his life was far more adventurous and complex than that, and these other aspects of the man are often overlooked and overshadowed.

Historical non fiction is one of the things I love. When you match an incredible narrator with a tremendous historical story, you get a blockbuster that is better that the book and the reader. Phillip J. Mather has managed to capture the essence of Churchill and the excitement and tension of the times perfectly making this a must listen for fans of historical audiobooks.

This is a perfect introduction to Churchill. Learning about such an important figure in history can be overwhelming, if you're wondering where to start consider this. At just under two hours and with a solid narration, it's an enjoyable snap shot of Churchill's life.

I would not hesitate to recommend this audiobook to anyone with an interest in Winston Churchill or history in general.

What about Phillip J. Mather’s performance did you like?

I thought Phillip J. Mather done an excellent job narrating this book, and I think that the author could not have picked a more perfect person for the job. Phillip J. Mather has the quintessentially English gentleman's voice and in my opinion it is perfect for a book about such an important person in British history.

Definitely, it was so interesting it captured my attention straight away.

I enjoyed Phillip J.Mather for the short time he was narrating this book, but I never quite got used to his British pronunciation of common English words. That is not his fault but more of my American ears trying to interpret his accent.

There was no real story in this book. It sounded more like one long bullet list of events in Churchill's life than any real narrative. The best part of the book is the quotations of sayings by Churchill at the end of the book.

Phillip J. Mather made this book worth listening to. Love the narrator; not so much the story which really was no story at all (at least not when compared to well written history books, mean of which I have in my collection of written books).

I have enjoyed other Charles River Press titles and found this short biography to be enjoyable and entertaining as well as educational.

My knowledge of Churchill's early years and family life was lacking and this title filled in some gaps for me. I thoroughly enjoyed the timbre and reverb of the upper class London accent of the narrator and felt he was a good match to the work.

Chapter 2 in the Audible book consisted of reading the chapter titles in the book. I found this a bit irritating and not easy to remember or use. If there had been a way to incorporate the written chapter titles into what is shown on the Audible app that would have been valuable especially when revisiting the book to re-listen to specific periods in Churchill's life.

I received this Audible book in consideration for my honest review. All opinions are my own.

I was impressed that they put so much information into only a few hours!We learn all about Mr Churchill in this book.Most interesting were his thoughts during the war,of Stalin and Hitler.His life afterwards seemed to not be what he thought it would be.He was a man of his times,popular in Britain and the USA,but still lamenting the father he thought he could not please.
Phillip J Maher was a fine choice for the narration.He has a commanding voice,which was perfect.
"I was provided this audiobook at no charge by the author in exchange for an unbiased review via AudiobookBlast dot com."

Great insight into the character and the times he lived through . . . well narrated