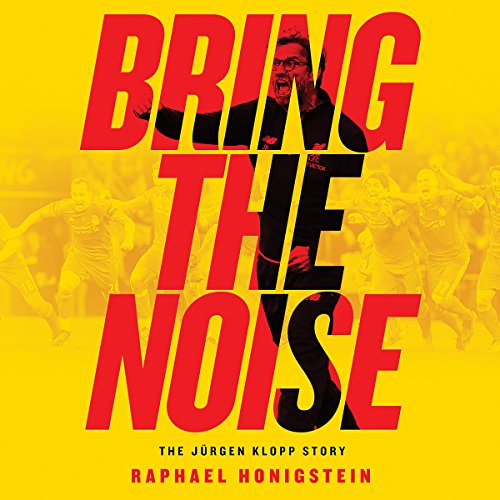 By: Raphael Honigstein
Narrated by: Adam James
Try for $0.00

Jürgen Klopp's coaching career began in the German second tier at the unfashionable club of FSV Mainz 05, whom he steered to the Bundesliga for the first time in 41 years. In 2008, he joined Borussia Dortmund, where he achieved back-to-back league titles and took the club to the UEFA Champions League final. He left Germany for one of the England's most challenging jobs: to manage Liverpool, a once-mighty club that had not managed sustained success since the 1980s. It was not a task for the fainthearted.

Anfield, Liverpool's home, is a temple to flamboyant attacking soccer powered by passion. In Klopp, Liverpool finally found a manager who embodied the essence of the club. Klopp is dynamic, expressive, restless, driven - he feels every move and play, every tactical shift, every contact on the field. His eyes betray a wild ecstasy and agony as his team thrives or falls. His game plan demands relentless commitment - the famous gegenpress - and he is one of the great personal motivators in all sport.

Raphael Honigstein, author of Das Reboot and Budesliga correspondent for the Guardian, has interviewed Klopp and followed his career since his early years, and better than anyone knows how to "bring the noise" to his subject.

"Honigstein digs deep to reveal a competitive, charismatic, and thoughtful man who - though prone to apologizing for mercurial outbursts - has in many ways outperformed his own limitations through hard work and passionate determination. The jury's still out on his accomplishments at the legendary LFC, but fans of European soccer should love this page-turning take on one of the most fascinating figures in the sport." (Booklist)

What listeners say about Bring the Noise

Great if you don’t speak german

Outstanding bit of journalism. However, as a native German-speaker I was a bit bothered by the narrator’s poor pronunciation of German words and names. Would still whole-heartedly recommend.

I've listened to tons of audio books but I've never heard such a horrible performance. Breaks my heart to give this only 3 stars because the story is wonderful. His pauses and emphasis is all wrong, so much so I've had rewind several times to understand. I'm buying the print book so that I can actually enjoy this book.

book is great. it's a little jarring that its a nonfiction book jumping timelines, but managed to be entertaining throughout. if you are a mainz, bvb, or Liverpool fan you already love klopp and should absolutely read this. if you are any soccer fan though you will love the way it delves into the development of the back 4 in Germany and the intricacies of the different levels and systems in Germany.

Interesting and compelling story. The narrator is ok. He completely butchers any words of German origin to a degree that is jarring, which is odd given the subject matter.

What a great view into Jurgen Klopp! Not just an exceptional football manager, but an amazing person all around.

So little written about this great coach. I'm a fan of the sport, this coach and Liverpool. A must read.

Excellent book to understand the origin of Kloppo! A must read for any Liverpool fan or any fan of football..

Interesting insight into Kloppo's highs and lows. Overall a good listen, though performance didn't quite bring all of the noise.

Great audio book, well narrated by Adam James. The jumping timeline cant take some getting use to, but the book flows well. Excellent insight to the exciting manager and how he pushed his way from player/pundit/manager. I might be a little biased as a Liverpool supporter, but this is a good read for those interested in the game.