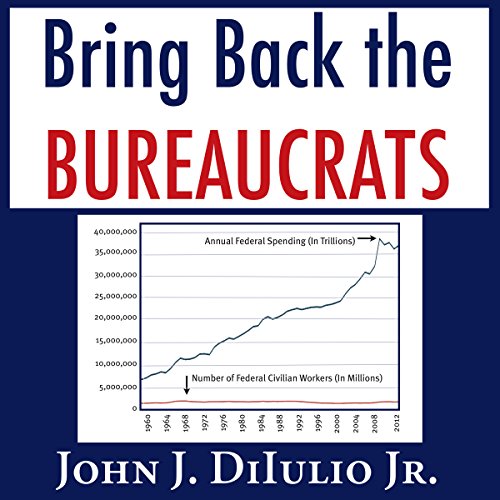 Bring Back the Bureaucrats

Bring Back the Bureaucrats

In Bring Back the Bureaucrats, John J. DiIulio, Jr., one of America's most respected political scientists and an adviser to presidents in both parties, summons the facts and statistics to show us how America's big government actually works and why reforms that include adding a million more people to the federal workforce by 2035 might actually help to slow government's growth while improving its performance.

Bring Back the Bureaucrats tells us what our elected leaders won't: There simply are not enough federal workers to do work that's critical to our democracy. The lack of enough competent, well-trained federal civil servants figured in the failed federal response to Hurricane Katrina and in the troubled launch of the Obamacare health exchanges. Bring Back the Bureaucrats is further distinguished by the presence of E. J. Dionne, Jr. and Charles Murray, two of the most astute voices from the political left and right.

The book is published by Templeton Press.

"A brisk, lively polemic that surprisingly calls, on conservative grounds, for an enormous increase in the federal civil service.... " ( American Prospect)
"An eye-opening account of the hollowing out of American government. DiIulio, an expert on public administration at the University of Pennsylvania, points out that the US has fewer full-time federal officials than it did in 1960, while the amount of money they dispense has increased fivefold. In their place is a legion of for-profit contractors and non-profit NGOs with highly mixed motives, about which we know very little." ( Financial Times)
"A reproof to everyone who hates government or loves government without understanding what it does - which covers most of the American ideological spectrum." ( Washington Post)

Easy to follow and understand. I read this for a class and it really taught me a lot and highlighted aspects of our current state of government that I was not privy to. A lot of data is used to substantiate the literature which I enjoyed.