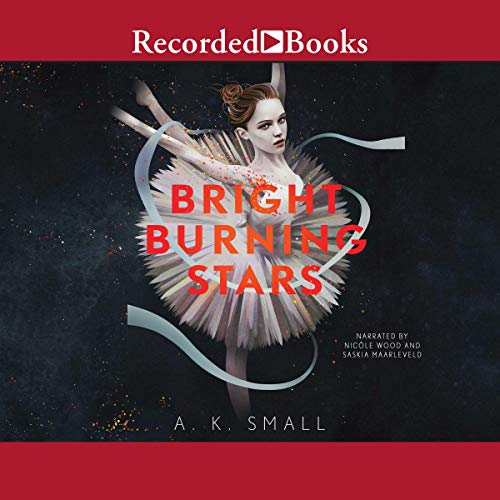 By: A. K. Small
Narrated by: Nicole Wood,Saskia Maarleveld
Try for $0.00

Best friends Marine Duval and Kate Sanders have trained at the Paris Opera Ballet School since childhood, where they've formed an inseparable bond forged by respective family tragedies and a fierce love for dance. When the body of a student is found in the dorms just before the start of their final year, Marine and Kate begin to ask themselves what they would do to win the ultimate prize: to be the one girl selected to join the Opera's prestigious corps de ballet.

Would they die? Cheat? Seduce the most talented boy in the school, dubbed the Demigod, hoping his magic would make them shine, too?

Neither girl is sure. But then Kate gets closer to the Demigod, even as Marine has begun to capture his heart. And as selection day draws near, the competition - for the prize, for the Demigod - becomes fiercer, and Marine and Kate realize they have everything to lose, including each other.

In Bright Burning Stars, debut author A. K. Small pens a stunning, propulsive story about girls at their physical and emotional extremes, the gutting power of first love, and what it means to fight for your dreams.

"Bright Burning Stars is the compulsively readable story. I was breathless and battling tears up until the very last stunning turns onstage and beyond. A dazzling, heart-wrenching debut." (Nova Ren Suma, number-one New York Times best-selling author of The Walls Around Us)