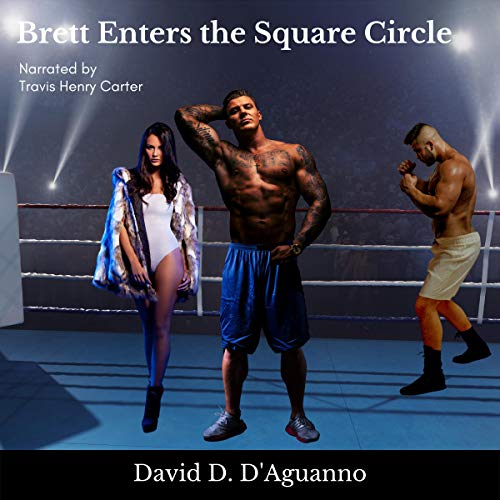 Where in the world is Stacey Ashton?

Stacey herself told her employer that she was leaving for Philadelphia on personal business.

But Melanie Foster suspects that the girl has run off to Florida with her husband instead.

Enter private detective and self-proclaimed unscrupulous bastard Brett Cornell who attempts to discover Stacey's true whereabouts, only to learn that she may actually have been murdered - and that the murder took place a lot closer to home.

In this fifth Brett Cornell detective novel set in the late 1980s, Brett finds himself pitted against a group of particularly deceitful and unpredictable characters.

And at the same time, he is about to imperil those stunning Adonis-like features of his when he enters the boxing arena in a major bout that may very well turn out to be a life-changing experience for him.

What listeners say about Brett Enters the Square Circle

Yes it is a sly witty fun experience.

Love the super male ego of our hero the true gift to our Planet our Universe and our Galaxy
The biggest stud Private Dick in history.

What does Travis Henry Carter bring to the story that you wouldn’t experience if you just read the book?

Well he is Brett he brings us closer to this magnetic character of the ages.

Every moment you experience Brett is moving.

Brett is in Trouble


Brett Enters the Square Circle is the fifth book in the Brett Cornell series of mysteries by David D. D’Aguanno and after I reviewed three other audiobooks of his, I couldn’t stay away from this absolutely unique character and his hilarious adventures. Although the audiobook version has been released 6 years after the original publication, it was a blast to experience it in this format.

The story follows once again private detective and self-proclaimed unscrupulous bastard Brett Cornell who is hired to find a missing woman at her family’s request. More than that, our ”hero” will accept a challenge that will probably change his perspective on life. At the end of this new adventure, Brett Cornell could be a changed man, or even a dead one.

Newcomers be warned! Brett Cornell is not your regular Private Investigator. He has no redeeming traits or qualities… Actually, he is a drunk, a cheat, a thief, a misogynist and a liar with his mind only on sex, money and how to get in bed with all the humans of the female persuasion, no matter the costs or the consequences.

If you add that he is not the brightest bulb in the bunch and that, at times, he is really stupid, you might cut him some slack and enjoy this hilariously funny novel… But, stay tuned until the end, you might be surprised, pleasantly.

Voiceover artist, actor and narrator Travis Henry Carter returns once again and brings to life Brett and all other characters with talent, intensity and a unique delivery. He reads the entire book using a wiseguy accent that gives it a complete level of immersion. He uses a large number of voices to entertain the listener. He manages to enrich the entire narrative experience with humor and a sense of continuity that is predominant for the whole series.

Funny, at times brutal and violent, but always extremely entertaining, Brett Enters the Square Circle is another great mystery in this series that’s getting better with every new book released.

If you like this review please consider giving it a Helpful Vote below. You can find more of them here and on theAudiobookBlog.
I also post reviews at the author / narrator / publisher’s request. Get in touch with me for more details.

Book 5 of this great series and I still love it just as much as I did when I started with book one.
Truly, I have no idea how out of nowhere he comes out with those sentences that just blow my mind make laugh like there is no tomorrow!
Brett is one hell of a character, a fool that got more luck then a dog , he reminds me of the pink panther but much tougher.
The ending this time surprised me because after all Brett does have emotions which is refreshing, something new is coming, after all he is getting older.
I can't wait for number six to see where this masterpiece is heading.
Perfectly written and perfectly narrated so there are no complaints.
I love this series and I can pretty much guarantee that all will.

So I absolutely recommend this book, you'll thank me !

A gem in the mystery genre

This was my second Brett book, just as good as the first. A well-crafted mystery with a uncommon protagonist; a grandiose narcissist with the personality of a bad-guy professional wrestler. Picture your favorite mystery solved by Ravishing Rick Rude. As awful a guy as he is, you'll be rooting for him. You gotta love Brett Cornell. Highly recommended.

The best one so far!

This had to be my favorite Brett Cornell Mysteries book so far! This story is a little darker than the previous books but the humor and wit from David D'Aguanno is still there!

I loved everything about this book. It was funny, it had plenty of mystery and we got to see another side of Brett that I think the listener will really enjoy.

The narration is perfect and I just love listening to Brett! I hope this is the start to a deeper side of Brett because I really enjoyed the darker tones of the story as well as more emotions coming from Brett. Great story, great narrating, great overall!

I was given this Audiobook for free in exchange for an honest review.

I absolutely loved It! This book is full of humor, drama and mystery. You will be entertained! The narration was superb and gave the story that extra flair! The author did an amazing job with the characters and plot. This was my first book by this author but definitely not my last. I look forward to reading more books in this series. I was given this free review copy audiobook at my request and have voluntarily left this review.

Well...
This book is just as good as the previous ones in the series, and, finally, I can say that I actually felt strong empathy for Brett. This book shows so much more of Brett's soul than the mare "scrupulous bastard".

Brett still has me laughing!

Brett is still in love with himself. His tush supposedly puts the leaning tower of Pisa to shame. In some ways, I wish I was in the boxing ring with him. Lol

Brett Cornell is a private detective in Rhode Island. He's big, he's fearless and he knows how to fight. He is full of smart comments, opinions about orange juice and is quite sure that he is the most amazing lover of all time. He is cunning. He is unscrupulous and will certainly pad his bill to eke out as much money as he possibly can from his clients. And, he's not much for education.

Brett begins by running into a series of rough cops at a bar. These are violent officers who throw their weight around with everyone - especially with know-it-all loudmouths like Brett. Soon enough, Brett ends up being challenged to participate in a charity fight with the biggest bruiser cop of the bunch - except that everyone knows that this fight will be for real.


In the meantime, Brett has been hired to find a missing woman who is suspected of having run off to Florida with his client's husband. It's the middle of winter in Rhode Island - who wouldn't want to take a working vacation to Florida? But, things get more and more complicated the more Brett investigates...

The audiobook was read by Travis Henry Carter who delivered a fantastic performance. He performed lots of accents and male and female characters with a lot of skill.

However, I found Brett's long-winded expositions to be wearisome. He is a memorable character, but not one that I would ever choose to spend any time with. The book is told in first person and Brett takes a long time to tell any story. He can be amusing, especially in his profound ignorance (he thinks Tampa is in Arizona, for example), but he just plain old wore me out.

I rate this audiobook 3 stars out of 5.

Note: I received a free copy of this audiobook from the publisher so that I could write an honest review.

I listened to this audio book i and loved it! Brett is so funny, even if he is a total jerk and player. This series is so entertaining and funny.

A few rotten tomatoes in every bushel of cucumbers

Life is catching up with Brett. His secretary has left him, although the relationship with ever faithful Ginger continues to be on-off, his glorious beauty has been slightly disfigured by the missing ear and even his title as most Unscrupulous Bastard is being challenged by Big Bull. He even finds himself actively involved in working in his Private Eye occupation, looking for a missing girl, at the same time as he tries to prepare for a boxing match with bully cop, Gil Bailey - and, worst of all, someone is actually sorry for him.

The wonderful Travis Henry Carter is back, taking on the persona of Brett as he flawlessly reads the text with all of the charismatic charm and wrongly expressed quotations of our hero. Just listening to him read gives a tingle of delight. And all of the other protagonists have their very distinctive voices, too, from sexy Melany Foster to Sergeant Joe Raff, police officer and boxing coach. A superb performance, as always.

This is the fifth book in the gloriously funny series about the self opinionated, insufferably egotistical private eye, Brett Cornell, self styled unscrupulous bastard, girl magnet and nobody's friend. Not someone to ever hope to meet in real life but between the covers of a book, superb. Both dialogue and action are hilarious, as always. But this book takes a darker turn and a new Brett tentatively begins to peep out, if you know what I mean, Jelly Bean.

My thanks to the rights holder of Brett Enters the Square Circle, who, at my request, freely gifted me a complimentary copy, via Audiobook Boom. It's funny, it's naughty and absolutely unmissable.