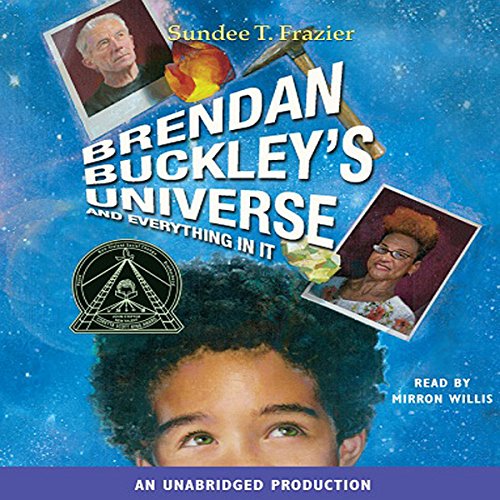 Brendan Buckley's Universe and Everything in It

By: Sundee T. Frazier
Narrated by: Mirron Willis
Try for $0.00

Ten-year-old Tae Kwon Do blue belt and budding rock hound Brendan Buckley keeps a "Confidential" notebook for his top-secret scientific discoveries. And he's found something totally top secret: the grandpa he's never met, whom his mom refuses to talk about or see, is an expert mineral collector and lives nearby!

Secretly, Brendan visits Ed DeBose, whose skin is pink, not brown like Brendan's, his dad's, or that of Grampa Clem's, who recently died. Brendan sets out to find the reason behind Ed's absence, but what he discovers can't be explained by science, and now he wishes he'd never found him at all.

What listeners say about Brendan Buckley's Universe and Everything in It

Brendan shows curiosity, bravery, love, understanding, and sets an example for his family to follow! Sometime hurtful events need to be brought up and discussed in order to put them to rest forever. Kids want to know about their family and how it makes them apart of the whole world! Don’t wait to long to say your sorry!