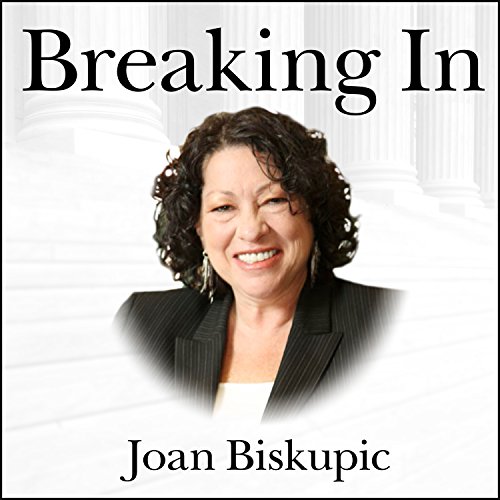 By: Joan Biskupic
Narrated by: Carrington MacDuffie
Try for $0.00

In Breaking In, veteran journalist Joan Biskupic tells the story of how two forces providentially merged - the large ambitions of a talented Puerto Rican girl raised in the projects in the Bronx and the increasing political presence of Hispanics, from California to Texas, from Florida to the Northeast - resulting in a historical appointment. And this is not just a tale about breaking barriers as a Puerto Rican. It's about breaking barriers as a justice.

As a Supreme Court justice, Sonia Sotomayor has shared her personal story to an unprecedented degree. And that story - of a Latina who emerged from tough times in the projects not only to prevail but also to rise to the top - has even become fabric for some of her most passionate comments on matters before the Court. But there is yet more to know about the rise of Sotomayor. Breaking In offers the larger, untold story of the woman who has been called "the people's justice".

"A balanced but also admiring portrait of a Latina, a jurist and a trailblazer." ( Kirkus)

What listeners say about Breaking In

This book did not offer any profound insights, or inspire me to change the world! However, I think this book offered keen insight into the behind the scenes battles associated with a Supreme Court nomination.

If you don't already know and respect the Sotomayor story, you definitely should feel pride for the great governmental system established by the United States Constitution allowing for the advancement of such a talented woman.

This book is essentially a history of the selection of the first Hispanic Supreme Court Justice. Expect a very surface analysis of the politics involved over the decades leading to this historic announcement by President Obama, and a brief biographical analysis of Sotomayor.

I prefer more thorough analysis of the subjects I choose to study, and here I thought I was going to get a very specific analysis of the rise of Sotomayor. Here, the book spends as much time as the various players surrounding Sotomayor as it does detailing her "rise." Not a bad book, but the title is slightly misleading.