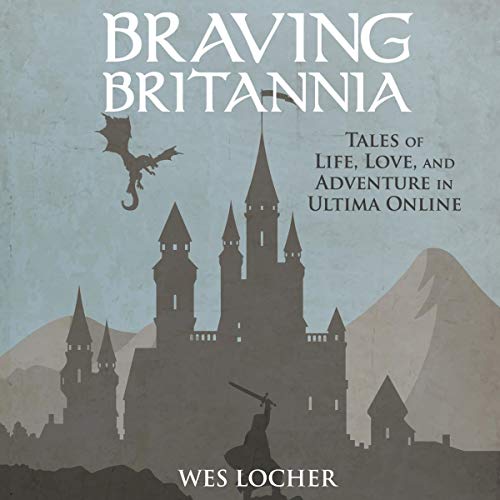 By: Wes Locher
Narrated by: Robert Bekuhrs
Try for $0.00

Braving Britannia is an oral history of the groundbreaking PC video game, Ultima Online, which launched in 1997 and still operates today. The audiobook features interviews with players as they share how the game affected their lives.

Over the past two decades, millions of players have inhabited the virtual world of Britannia inside the massively multiplayer online fantasy PC game, Ultima Online. Released in 1997 by developer Origin Systems and publisher Electronic Arts, Ultima Online is known as the grandfather of MMOs.

Braving Britannia: Tales of Life, Love, and Adventure in Ultima Online collects interviews with 35 of the game's players, volunteers, and developers, revealing what they did, where they adventured, and how their lives were shaped, changed, and altered through experiences in Ultima Online's shared virtual world.

In a fantasy world of limitless potential, the only thing players seem to enjoy more than playing the game is talking about it, and yet, the true stories behind the avatars have largely gone unpublished for the past 20 years. Until now.

What listeners say about Braving Britannia

This book does an amazing job of capturing a truly unique time in gaming history. While listening to the book I often found myself smiling, or even laughing out loud while listening to stories of other people who's adventures(or misadventures) so closely paralleled my own experiences in the world of Ultima Online. Whether you're and old school gamer or just curious about the early days of online gaming, I think there is plenty of entertainment and history to be gleaned from this fantastic book. I can't wait for a followup!

A Great Nostalgia Trip to the World of Britannia

This book reminded me of great times and rekindled my excitement for a game I haven't played in years.

Listening to this book transported me to the first time I held an Ultima Online box in my hands. The back cover described a fantasy world where I could be anything I wanted to be, surrounded by players from around the globe all forging their own identities in Britannia. It wasn't until years later that I actually got to play the game, but it fulfilled every promise and I lived half a dozen lives through my computer screen in the world of UO.

Braving Britannia is a loving tribute the first great MMORPG, a game with a legacy that lives on to this day. It's a book about the game, but more importantly, it's a book about the people who made it the experience it was. From famous players who ran in-game taverns, to the developers that built and maintained the game, to the simple crafters and notorious player killers that made up the game's population, Locher weaves the threads of the great tapestry that was (and still is) Ultima Online.

As a player who spent most of his time on free shards, there were no stories about the players I knew personally. Given the scope of the book, Locher couldn't possibly cover every facet of the game's wider world. But if you are a veteran of the Great Lakes, Hokuto, Napa Valley, Sonoma, or Siege Perilous servers, you will find something extra to enjoy in this book as he interviews the players that shaped those realms. But even if the individual actors are different from those you lived with, you will still see the full spectrum of personalities that gave UO color. Locher interviews guild leaders, player killers, crafters, roleplayers, developers, community moderators, and more. He also throws in a few stories of his own time in the realm, including his first run in with a PK and the story of how he lucked into his first house.

Bekurhrs performance helps give the interviews life with his voice chosen for each interviewee. My only complaint is that some of the voices were a bit...stereotypical (I couldn't help but wonder if the German player really had the thick accent that Bekuhrs read his quotes with). Regardless, the narration was consistent throughout, and the voices made it easy to follow along.

The biggest endorsement I can give this book is that it made me want to play Ultima Online again, a game I haven't touched since 2005. It reminded me of the great times I had playing that game, and any book that can bottle up that sort of emotion deserves a full recommendation!

One of the best read audio books I’ve listened to. The subject matter is somewhat of a niche interest compared to other books I listen to but the vocalist was able to keep me engaged with the material without me having to rewind as I often have to do with poorer narrators.
Wish this narrator was hired for the subjects I delve into more often: memoir and healing.

Although I am not a gamer, I am seriously considering becoming one after listening to this audio book. Locher's thorough investigations of the stories behind this ground-breaking social phenomenon have been extremely interesting, and it's been quite a pleasure to learn about the intricacies of the online gaming world. Bekuhrs' wonderful performance kept me quite entertained, as he did an excellent job with unique voices for each interviewed personality. His voiceover was never dull, nor too excited, and listening to him made my long commutes so much more enjoyable. I highly recommend this title to anyone and everyone, interested in online gaming or not!

Love the book, it's lots of fun and makes me wish I had played the game. As with all audio books, narration makes or breaks it. It definitely makes it, in this case. If I could hire this guy to read all of my books, I would.