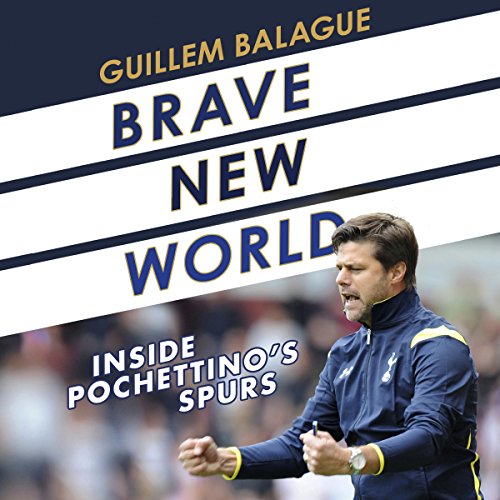 By: Guillem Balague
Narrated by: Piers Hampton
Try for $0.00

The exclusive behind-the-scenes story of the Mauricio Pochettino revolution at Spurs, told in his own words.

Since joining the club in 2014, Mauricio Pochettino has transformed Tottenham from underachievers into genuine title contenders. In the process, he has marked himself out as one of the best young managers in the world, more than holding his own against the Premier League's established heavyweights. He has done so by promoting an attacking, pressing style of football and by nurturing homegrown talent, fully endearing himself to the Spurs' faithful along the way.

Guillem Balagué was granted unprecedented access to Pochettino and his backroom staff for the duration of the 2016-17 season, and he has therefore been able to draw on extensive interview material with Pochettino, his family, his closest assistants, players such as Dele Alli and Harry Kane and even a very rare conversation with Daniel Levy to tell the manager's story in his own words.

From Pochettino's early years as a player and coach to his transformation of Tottenham into one of the best teams in England, this audiobook uniquely reveals the inner workings of the man and of his footballing philosophy. It also lays bare what it takes to run a modern-day football team competing at the highest level over the course of a single campaign. The result is the most comprehensive and compelling portrait of a manager and of a club in the Premier League era.

The narrator was a bit cringe worthy at times, but the message was amazing. Poche is a man of honor, a quality lacking at the highest level these days.

Narrator is a bit soft spoken and sometimes hard to hear. Otherwise a good listen.

all over the place . fantastic they decidided to do this at thos time. thfc is in the right way

This isn't just about Tottenham Hotspur. This book gives you the insight in how to be a leader and not simply a boss.

I'm positive that after you've finished listening to this book, you'll be in a position to apply what you've heard.

If you are a supervisor, manager, a head of department or even a CEO, the team you lead will benefit by you having listened to this book.

Apply what you've learned, keep your head up, and remember to smile.

Different to what I expected

Really enjoyed the format of this book, and there were some really good clear lessons that I have taken on board from Pochettinos leadership philosophy.

Loved the book. Attention to detail from the mind of a genius. Pottechino is an Inspirational man with a heart of gold.

TTID THFC COYS Great book about a great man. highly recommend this book to all football fans not just Tottenham Hotspur fans. I hope and pray that it's him and his coaching staff that bring the success that we so desperately yearn for.

Fantastic insight into a tremendously honest person. Great book and congratulations to all involved. Would definitely listen to it again.

Great inside into the fantastic years under Poch, with references from many players who have worked under Mauricio.

I loved this book. A fantastic insight into the mind and workings of one of the best football brains and coaches in the sport. His passion for the game, for his colleagues and for his players comes across so well. If you love football, this is a must read.

This book is a must for all football fans, of any club. It offers a remarkable look at the modern day challenges football managers endure. Poch's status as a Tottenham legend was cemented long ago, but this book serves to confirm his genius.

One thought - maybe an idea to have a narrator who knows how to pronounce names like Lukaku, and Aguero. Some of his pronunciations were cringeworthy.

Great Insight for any football fan!

What a book for any football lover, great insight into the leadership of one of the games greats.

If you love the man you will love the story. Best bit for me was the praise and adulation he recieved at the end of the book, Mr. Levy being brilliantly frank.

Didn’t think I could love Poch anymore than I already did. I was wrong. Great insight into the philosophy of what he’s building at Spurs. Best football book I’ve read/listened to

I am a tottenham fan and so could be seen as bias but it wasn't the club that won me over. it was the contemplative nature of Pochettino and the narrator was phenomenal. I fell in love with what Poch fell in love with.

fantastic listen by any club supporter.