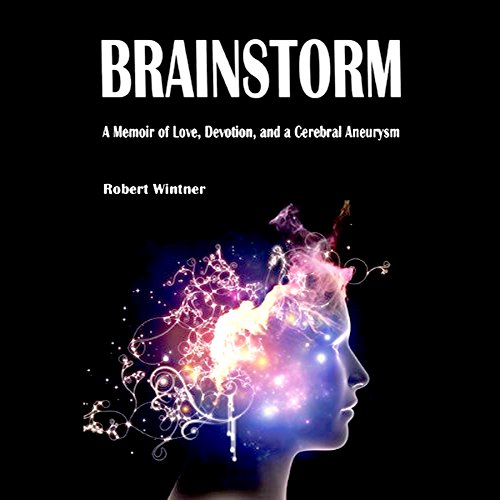 By: Robert Wintner
Narrated by: Jonathan Yen
Try for $0.00

Nine million Americans are touched by aneurysms during their lifetimes. This is one story of love. Brainstorm is the candid and powerful memoir of the author's harrowing experience of an aneurysm and his road to recovery. It is a journey of love and devotion and a clash of medical beliefs and countercultures. The fierce resolve of the author and his wife is extraordinary, inspiring, and matched only by the tremendous competence and care of the medical system--one to which the author initially stood in opposition but that he later learned to admire and respect.

This audiobook is for anyone who has experienced the fear and difficulties of a major illness. The themes, truths, and above all compassion this book shares will be familiar not just to the nine million Americans affected by aneurysms but to anyone whose family has been touched by a medical trauma.

Filled with raw emotion, Brainstorm affords quiet but powerful support to those suffering similar circumstances and strives to tell them they are not alone.

What listeners say about Brainstorm

I thought I this book was for me... sadly, not so.

This is the memoir of Bob and Rachel and their real life experience with modern medicine (in the 1990s). In general, they work with nutrition, exercise, and alternative forms of medicine. While living in Hawaii, Rachel is diagnosed with breast cancer. She chooses to forgo the advice of her doctors and works with an alternative medicine specialist to treat the cancer. Years later, while the couple is living in Washington state, Rachel suffers a major aneurysm and faces the difficult decision of trusting modern medicine or seeking a different route.

The book started out with Bob and Rachel meeting and how they become a couple for the second half of their lives. I like that Rachel does a lot of animal rescue work and this continues no matter where she finds herself. In Hawaii, the two revel in nature and sea and lead relatively active lives. They also enjoy some self-medicating through drugs and alcohol. Alternative medicine and nutrition have kept them both out of doctors’ offices. Then Rachel is diagnosed with breast cancer. She elects to go with alternative medicine, which involved some native fruits and altering her body’s pH (to make her body inhospitable to the cancer cells) instead of radiation therapy, chemotherapy, or mastectomy. Rachel tells her survival story at breast cancer groups, where she stresses that each of the ladies is doing what they need to be doing for themselves (alternative or main stream medicine). I really liked that she didn’t pass judgement on folks going the modern medicine route. However, it did sound like she never had any follow up to confirm the cancer was gone, or wasn’t a false positive to begin with.

Skip ahead a few years and Bob and Rachel are living in Washington. Roughly 80% of this book was about Rachel’s brain aneurysm and the few days the two of them spent in a Seattle hospital. This is a word by word rehash of the bulk of the event and the pacing is very, very slow. There’s a lot of repetition and a lot of judgement and anger flying around. Rachel, for the most part, is awake and lucid during this event.

On one hand, Bob and Rachel demand respect for their preference for alternative medicine and want to be actively involved in any medical decisions. I totally support this as it is a positive message to be involved in medical decisions. However, they don’t offer much respect to the medical staff and their years of education, training, and experience. For example, one youngish doctor is referred to derisively as ‘Doogie Howser’ and another doctor, who was a little out of line, was repeatedly called the bad C word. Also, the couple didn’t seem to take into account how many aneurysms the hospital staff and doctors had seen and treated over the years, discounting their experience with an angry wave. At the time of the event, Rachel and Bob thought the hospital medical staff would be versed in alternative medical options for brain aneurysms and, quite frankly, that’s unrealistic. Medical science and knowledge is vast and people who have chosen to work in modern medicine can’t hold all the medical knowledge that entails, let alone possible alternative options (from the viable to the ridiculous).

So Bob gets on the phone and calls a dear friend and psychic. She can’t, or won’t, read Rachel’s future but she can get the number for a nationwide, respected alternative medicine foundation. Once Bob hears from the head of this foundation that there is no good alternative to modern medicine for treating brain aneurysms, he settles into the idea that surgery may very well be needed. Now he just has to tell his resistant wife. She was very focused on what would happen to her hair. This didn’t bother me much, as she was suffering a major aneurysm, was completely out of her normal surroundings, and may not have been 100% competent.

Bob and Rachel go through a lot of emotions during this time. It’s all pretty new to them and very foreign. Surgery is a big, scary thing for them. Indeed, every little bruise, needle mark, etc. seems to upset them. I know the description says this is a personal journey that left the author appreciative of the medical care his wife received, but there was very, very little of that in the book and totally reserved for the tail end when a follow up appointment clears Rachel to get back to her life, including the pot and alcohol and travel.

I applaud the honesty of the author in recalling this event. However, it was a bit tedious to give a listen to as it was so very negative and the pacing was extremely slow and repetitive. The ending wasn’t some big epiphany, so I was left wondering why the author took so much detail with the telling. Perhaps this was a cathartic process for him?

To be clear, I cuss often, including the occasional C word. I have a biology degree but have turned to both alternative medicine and modern medicine. Both have left me wanting or grateful at different moments in my life. On the surface, I thought this book would be a winner for me. However, that was sadly not the case.

I received a copy of this audiobook at no cost as part of the iReads Book Tour in exchange for an honest review.

The Narration: Jonathan Yen did a decent job with this book. It didn’t require many voices. However, he had a solid, skeptical voice for the author and pulled off a believable female voice for Rachel.