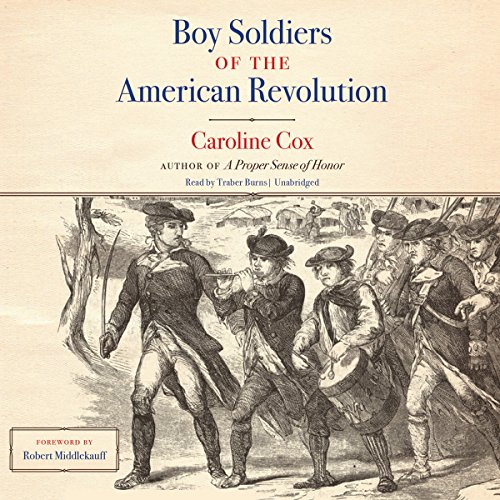 Boy Soldiers of the American Revolution

By: Caroline Cox
Narrated by: Traber Burns
Try for $0.00

Between 1819 and 1845, as veterans of the Revolutionary War were filing applications to receive pensions for their service, the government was surprised to learn that many of the soldiers were not men but boys, many of whom were under the age of 16 and some even as young as nine. In Boy Soldiers of the American Revolution, Caroline Cox reconstructs the lives and stories of this young subset of early American soldiers, focusing on how these boys came to join the army and what they actually did in service. Giving us a rich and unique glimpse into colonial childhood, Cox traces the evolution of youth in American culture in the late 18th century, as the accepted age for children to participate meaningfully in society - not only in the military - was rising dramatically.

Drawing creatively on sources such as diaries, letters, and memoirs, Caroline Cox offers a vivid account of what life was like for these boys both on and off the battlefield, telling the story of a generation of soldiers caught between old and new notions of boyhood.

What listeners say about Boy Soldiers of the American Revolution

The author Carolyn Cox died on July 11, 2014 at the age of 59. Her mentor the famous University of California Berkley historian Professor Robert C. Middlekauf proceeded to see the book was published. Cox was an award winning Professor of History at the University of the Pacific in Stockton, California.

Cox’s scholarship shines thought the book. Cox noted between 1819 and 1845 veterans of the Revolutionary War were applying for government pensions for their war service. It was a surprise that many of the soldiers were boys at the time of their service. Cox states she called boys those below the age of sixteen as that was the minimum age for militia service. The author points out that those sixteen and above could be drafted but they could hire a substitute or have a family member replace them. Cox states that frequently the replacement was a young boy below the age of sixteen.

I have been reading biographies lately and I found it refreshing to read a scholarly book aimed at a specific topic. The book is well written and researched. Cox explored the pension application from the Revolutionary War then she searched for more information about the boys. Cox reconstructed their lives with the use of diaries, letters, memoirs and archived documents. The author also discussed the treatment of boys in the military by the British, French and Germany. Cox painted a picture of what life was like in the late 18th century. Traber Burns does a good job narrating the book.