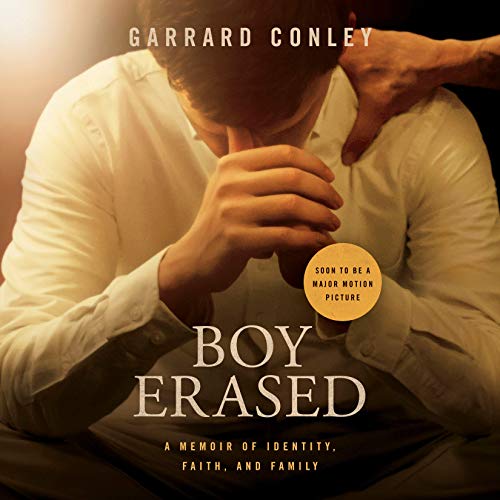 By: Garrard Conley
Narrated by: Michael Crouch
Try for $0.00

"Every sentence of the story will stir your soul" (O Magazine).

The son of a Baptist pastor and deeply embedded in church life in small town Arkansas, as a young man Garrard Conley was terrified and conflicted about his sexuality.

When Garrard was a 19-year-old college student, he was outed to his parents and was forced to make a life-changing decision: either agree to attend a church-supported conversion therapy program that promised to “cure” him of homosexuality; or risk losing family, friends, and the God he had prayed to every day of his life. Through an institutionalized 12-Step Program heavy on Bible study, he was supposed to emerge heterosexual, ex-gay, cleansed of impure urges and stronger in his faith in God for his brush with sin. Instead, even when faced with a harrowing and brutal journey, Garrard found the strength and understanding to break out in search of his true self and forgiveness.

By confronting his buried past and the burden of a life lived in shadow, Garrard traces the complex relationships among family, faith, and community. At times heart-breaking, at times triumphant, this memoir is a testament to love that survives despite all odds.

"Exceptionally well-written... This timely addition to the debate on conversion therapy will build sympathy for both children and parents who avail themselves of it while still showing how damaging it can be." (Publishers Weekly, starred review)

"In a sharp and shocking debut memoir, Conley digs deep into the ex-gay therapy system... An engaging memoir that will inevitably make readers long for a more equal future.” (Kirkus Reviews)

What listeners say about Boy Erased

Not What I’d Hoped

The idea behind this memoir is fascinating and stories like these need to be told. Still, I felt this book kept me at arm’s length.

My problem was with Conley’s style of writing. His prose is incredibly flowery and I can’t help but think he got so caught up in literary flourishes, he lost the story’s heart. It never shakes off the vibe of a university creative non-fiction class.

Considering this book is the author’s memoir, I feel like I don’t know him at all. He writes himself as a cipher, without any real depth, instead focusing on his observations of people and items surrounding him. He goes to painstaking length to describe things like fingernails, ceramic pipes, and his mother’s clothing- but doesn’t allow the reader to really see his emotions or who he is. There’s a wall that never comes down.

I’m genuinely sorry I didn’t love this book the way I hoped I would. It’s really all a matter of personal taste, though and I have nothing but respect for what Garrard had to endure and even more for his continuing advocacy. He’s certainly a hero in my book for speaking out against the ugliness of conversion therapy.

This book may be a rare instance when it might be best to read the epilogue before the rest of the book in order to realize the real emotion behind the body of the work. The author's writing style is very sophisticated, but to a few seems off-putting. Off-putting because it seems to lack the kind of anger that the events warrant to most of us. The epilogue makes it very clear what the writer's real feelings are even if the body of the text does not. This has caused confusion with some reviews of this book.

What is also not realized and confusing to some is the back and forth between periods of time. It seems odd and confusing to some, but in doing so the author is allowing us inside of his mind probably more than we deserve. Remember that this book is written and published about twelve years after the actual events. He admits that he is not even able to write this book for at least ten years as what happened to him was too painful to wish to recall, much less write.

When he finally does write, the text is forensic, incisive, surgical and to the best of his recollection, exacting. But it is not chronological because that is not how it seems to the sufferer of the horrid events which stream through the writer's mind ill-at-ease from one moment to another far removed in time and never in order. Neither should the book read in that manner.

The body of the text if not outright angry is most definitely scathing. Small words and phrases used in retrospect to deride and criticize the many who mindlessly and purposely hurt him and countless others with their phony self-serving pseudo-religious ex-gay rhetoric.

In the end only one person, other than the author himself, survives and in fact flourishes. The author's mother. An angel. A saint. Oddly enough, the father seems to love the son and in fact probably to present day dwells in a pit of horrid guilt that he caused this much harm and terror to his son, whom he truly does love. The words that the father just wants his son even now to be happy and the son's belief in the father's wish seems to ring true. I would wish all involved in that family full peace and happy reconciliation.

This is a beautifully written memoir, powerfully moving, and ably narrated,. Conley's coming of age account has significance for anyone, regardless of sexual orientation. It is about the journey into adulthood, the struggle with religious authority that is based in fear and and rejection, but the quiet and ongoing "victory" that is possible even if painful.

An honest look at the horrors of gay conversion therapy

As a survivor of the ex-gay conversion movement, this book. Is heartbreaking but very much real. All of the thoughts and feelings expressed by Garrard are real and things I recognize in my own coming of age story.

Scattered and uneventful. Hopped from one time. To another. The book just fell flat for me.

Compelling story that got a bit dragged out towards the end

Overall, I think this is an important and powerful story to be told. I’m thankful for Garrard for having the courage to write it. For me, it started to feel like it was going on and on unnecessarily towards the end - I’m not exactly sure why. Maybe just not my preferred writing style so it came off as repetitive or that he just talked about a scene for too long. The narrator was good. I think I would have preferred reading it rather than listening to it, but I still recommend it to everyone!

I thought this would be more memoir

I was super excited for this story. I thought there were would be more personal experiences, but it seems to be a repetitive story that doesn't really give you much to work with. Very shallow. You don't get very attached to the writer.

a genuine review of ex gay brainwashing. Thank you for writing this. I can't wait for the film.

Sins of The Father

Powerful, beautiful and tragic.
I adore Michael Crouch. That's actually how I can across this book. I searched for him.
I'm about to watch the movie which I'm sure I'm going to be disappointed in. The movies are never as good as the books. I just hope they capture the in depth seriousness of what happened to Garrard Conley.

I don't know what to head this

as someone who had to deal with a family similar to the author and conversion therapy as well. this was well put together and expressed things into words I've been struggling to do for years.