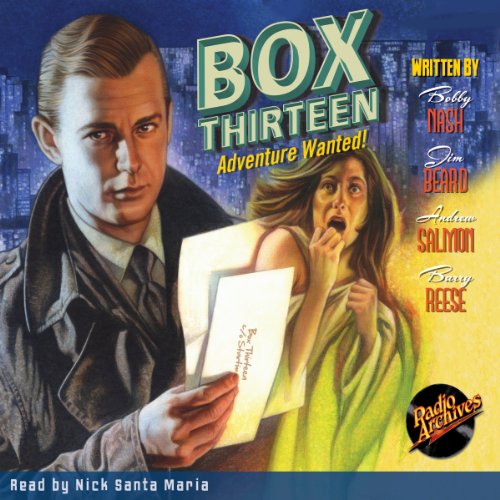 When Dan Holiday opensBox Thirteen, he never knows what adventure awaits him. A former newspaperman turned novelist, Holiday crafts the plots for his books by living them. Spurred into action by letters from his fans, Dan Holiday's adventures ranged from the outrageous to the dangerous. Whatever the case, Dan Holiday is sure to find adventure.

Based on the 1948-49 radio drama starring Alan Ladd, this collection includes 6 all-new; Box Thirteen; tales that carry on the action-packed tradition of the originals.

What listeners say about Box Thirteen

If you're an OTR fan and am familiar with the late 1940's weekly radio version of Box 13, you'll enjoy Dan's new adventures. The authors have captured the spirit of the old shows, especially the very first one. A couple of the new adventures have a X Files feel to them, but they are fun. All the stories are set in the late 40's and early 50's and the topical references are historically accurate. And the reader is excellent.